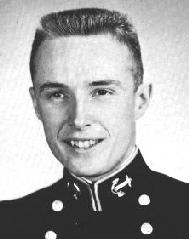 Ed came to the Naval Academy from the shadow of the walls of the Coast Gaurd Academy in New London, Connecticut. During his tenure here, he swapped ice and snow for sand and sunshine when his family moved to Port Richie, Florida. Ed was known by all for his friendly smile---at least ten per cent of his waking hours. Otherwise, it was rumored that his black cloud was responsible for the Annapolis weather. Ed's massive framed suited him for his role as crew coxswain his first two years, but after these seasons of rudders and voice, he retired to company sports. Assuming that he distinguishes himself at his duties as well as he has at parties, Ed will be a beneficial element in any branch of the service. 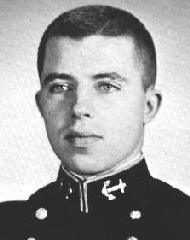 Walt left Archbishop Stepinac High School in July 1959 enroute to USNA and his four years by the Severn. Plebe year soon proved that he had a head on his shoulders and knew how to use it, for he spent a mere six weeks on company tables. How he loved those training tables for cross country and track! According to tradition Youngster year is for sleeping and dragging. Walt broke a few traditions there. The only problem was that he was dragging so much he didn't have time to sleep. The remaining two years proved to be just about the same. Walt had a hand in designing the 1963 Class Crest, was on the Brigade Activities Committee, and supported numerous other activities on every level. Meanwhile, he majored in Literature and maintained a fine grade average. On top of all this, he could always find time to devote to a wayward plebe. The unit Walt joins will receive an outstanding officer and the United States will receive a fine citizen, ready, willing, and able to carry more than his share of the burden. 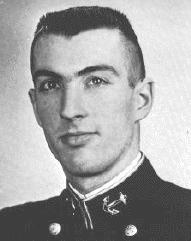 Before coming to the Naval Academy, Dick attended New Mexico Military Institute, Santa Monica City College, and the University of Southern California. Dick was active in extracurricular activities, being in the Antiphonal Choir, class ring and crest committee, and he also acted as company honor representative. He was a valuable man to have on any intramural team, being a hard worker and consistent point-getter in all sports in which he participated. A friendly, easy going guy, he was always ready to lend a helping hand, whether it was to a classmate or a plebe. Dragging or not, a Dick could usually be found nearly every weekend at a particular residence on King George. A credit to the Brigade, he will surely be a success in the service or any other aspect of professional life he will encounter.