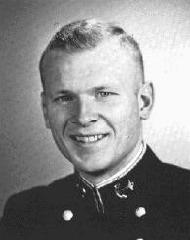 Shelby, being a boy from Kentucky, typifies the old saying "you can take a boy out of the country, but you can't take the country out of the boy". Shelby attended two years at Western State College in Kentucky before he discovered his true mission in life and came to the Academy. He quickly adjusted to Academy life and turned his attentions to studies and to activities such as Hop Committee and Antiphonal Choir. Afternoons would find him participating in company sports, with cross country, in which he was a standout, being his favorite. Being an audio fan with an expensive taste he would never listen to music unless it was being reproduced by the very finest equipment and was "loud". Never at a loss for words he could often be found in lengthy gab sessions with his classmates. He plans to wear the Navy Wings of Gold, and we feel sure he will be a credit to the service. 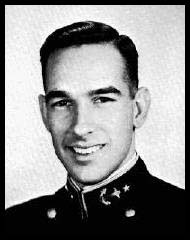 Hailing from the land of sunshine, "Snake", a true Florida cracker, surprised many of his classmates with his outstanding academic ability. Quick to learn and industrious, Ross compiled an enviable academic record. However his ardent love for the books did not suppress his genuine southern sense of humor and his fondness for athletics. A high school footballer, "Snake" pursued both battalion and brigade boxing as athletic endeavor during his four years at the Naval Academy. In addition, he also completed the rigorous airborne training course at Ft. Benning, Georgia. During his few free moments, "Snake" could most likely be found either constructing or flying his elaborate model airplanes. His combined qualities of intelligence and ambition will probably lead him toward post-graduate work and a successful future in Naval Aviation. 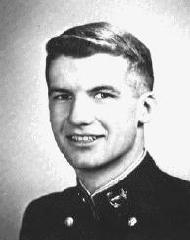 After shifting homes every two years as a Navy junior, Bill decided that any place that offered him four straight years would be delightful, and he raced into the hungry arms of the Naval Academy. Having just completed two years in an ivy-covered New England prep school, Bill was determined to defend his individuality at any cost. The cost was great, but Bill's soul was unscathed. His New England background soon led him to play squash for the plebe team and then the varsity. When not breaking squash balls and rackets and opponents' heads, Bill could be found driving his roommates insane with the sounds of Dave Brubeck, sleeping, rum-running, or lining up dates for his classmates.