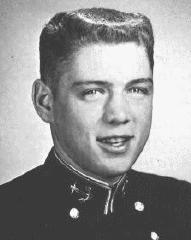 Craig came to USNA and brought his cheerful, easy-going, Midwestern personality with him. Craig started off plebe summer chipping his tooth on the butt of an M-1. With plebe year over, Craig found himself on the Superintendent's List. Youngster year found Craig at odds with the Executive Department, but he managed to take the early morning exercise with his usual smile. His yellow B-robe, won from some unfortunate Cadet at the Air Force Academy, brought to mind a large canary, and caused quite a stir. Craig is active in extracurricular activities, having formerly been a member of the Hop Committee. Craig's interests run from swimming and water-skiing to girls. His high academic average has enabled him to take a major in aerodynamics. His willingness to work and desire to succeed should carry him far in his chosen field. 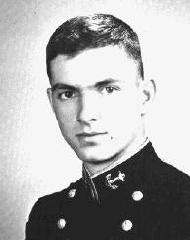 Amiable "Willaby" wasted no time after his high school days at Stevens Point. Plunging into the strange brand of college at the Naval Academy and pledging such a large fraternity didn't even phase him. Weekends he could usually be found reading or rooting for his favorite professional football team, the Green Bay Packers. Intramural basketball, volleyball, and softball were his fancy, and he excelled on several championship teams. Bill was elected Newman Club Company Representative by his classmates, and he was also an active member of the Reception Committee. His soft spoken manner and genuine concern for others will enable him to succeed in any endeavor he chooses after graduation. 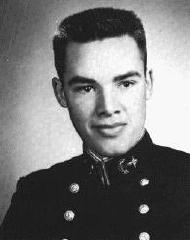 Ron made the trip to USNA after graduating from high school at Hubbard, Ohio. An excellent student and football player in high school, Ron brought these talents with him to Annapolis. Academics proved no problem, and he became a sprakplug on the company lightweights with equal dexterity. While at Annapolis, he developed a liking for soccer, played on the softball team, and spent much of his free time working for the Splinter and the <I>Lucky Bag</I>. He was also on the Reception Committee and the Brigade Activities Committee. Not being a dull lad, his major hobbies were "rock and roll" (a Ray Charles man all the way) and keeping two or three infatuated females from showing up on the same weekend. Since his first days at Navy, Ron aspired to become one of those Navy hot-shots with wings on their chests. If he continues his competent work and determined effort in the future, as he surely will, he will always be a success.