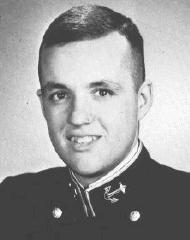 An avid oarsman from pre-Academy days, Chuck devoted a great deal of his spare time to earning a seat in the varsity lightweight shell. During the fall and winter, Chuck bolstered company intramural sports squads. His extracurricular activities were divided largely between the Public Relations Committee and his church's choir. Although taking part in the elective program, Chuck always managed to maintain an academic average of which he can be proud. His interests in the classroom tended more towards the social sciences and the Russian language, but at the same time he insisted upon being well-informed of the latest in scientific developments. Devoted to getting a job well done, Chuck will be a valuable asset to the Navy. 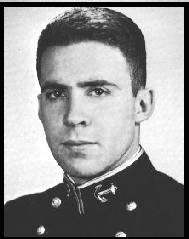 When Lou first reported to the Academy, he and the upperclassmen found that he would be at a "slight" disadvantage during his stay here, this disadvantage being the language barrier. "Pardon me, sir?" was an oft heard expression, but with the passage of time his English became more fluent. Although playing soccer and innumerable duties as company Ring and Crest Committee Representative took up much of his free time, he managed to fare exceptionally well on his exams, never going below the 2.5 level, though coming as close as possible on a few occasions. During football season one had to look no farther than the first row of the cheering section, where his fanatical cheering and mad gesticulations made him easily visible. Although he will not be a member of the Armed Forces of the U.S. due to his Chilean citizenship, Louie will always have a host of friends there. 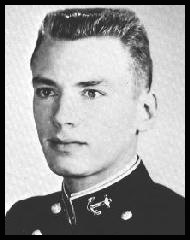 Straight out of Rensselaer High School, Andy made the jump from the small town atmosphere of his Hoosier State to the hustle and bustle of the academy with comparative ease. An athlete in his high school days, he became a perennial high scorer on the company basketball team. His shy manner and good nature always attracted a large following among the fairer sex, but quick thinking and tact always kept him one step ahead of them. Due to living for three years with roommates from New York, Dave is probably the only Hoosier in history with a Brooklyn accent. Between bouts with "The System," Dave divided his time evenly among girls, rock and roll, and academics. As for the future he plans to gain his three stars in either Navy Air or Navy Line and to remain a bachelor for as long as possible. With his winning ways and good humor he is sure to be a capable addition to any wardroom.