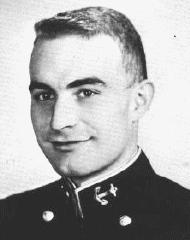 Gil joined the class of 1963 only after receiving from the Belgian Military Academy a commission as second lieutenant in the Belgian Army. Upon graduation he is returning to Oostende, where he was raised in staunch European tradition. Four years in the United States has led Gil to cultivate interests in American food, automobiles, and women. From the selection of American delicacies, he has singled out the Coney Island hot dog as his favorite. He is also impressed with the production of American cars, inferior though they may be. But he denies all possibilities of his supporting any entangling alliances with an American girl. Athletically Gil favored his European specialty, soccer, but he was also busy with several of the Academy's unfamiliarlist of sports. Though Gil's future lies in Belgium, the U. S. Naval Academy's mark will be seen in the success he is sure to win. 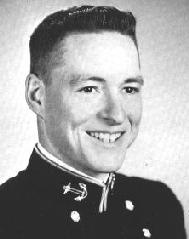 A westerner, Cliff came to us from Wallace, Idaho, straight from high school where he lettered in track. Here, the time he had left over from his one-man campaign with his academic departments seemed to be abundant for three men. He managed the varsity gym team, rowed 150 pound crew, dragged frequently, and engaged in numerous hobbies. Cliff's willing and tenacious attitude coupled with his open manner contribute much of his being one of the most likeable guys around. We're sure that Cliff will be a welcome addition to the fleet. 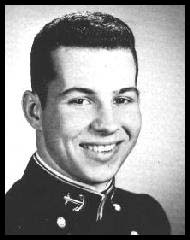 Bill came to the Academy from New York as he will personally tell you whether you ask or not. Bill previously attended Brooklyn Prep, where he was a captain of the swimming team and star pitcher for the baseball team. His talents did not leave him when he came to USNA. As a plebe he excelled in both swimming and baseball and has constantly improved in these sports. Bill is not only an outstanding athlete but also an excellant student, having attained the Superintendent's list. Somehow between athletics and studies Bill always managed to stop and contemplate life in the pad, on the deck or, during plebe year, in the closet. His social life also prospered. He always managed to have a drag at big events and says with a sly smile that he is quite a social lion. Bill with his outstanding spirit and vigorous perseverance has truly been a credit to the Brigade and will make an outstanding officer in the armed services.