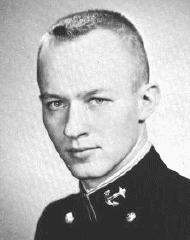 Lee hails from Illinois where he attended two years of college before entering the Naval Academy. It was at college that Lee was first exposed to flying. After acquiring his Pilot's License, he decided that his future was in Navy Air. With his quick smile and agreeable nature, he soon became popular with his fellow Midshipmen. Although appreciative of the fairer sex, Lee devoted all his attentions to "the girl back home." While at the Academy he was a member of the Glee Club and Protestant Chapel Choir. Besides music some of his interests were sports, liberty, and airplanes. By drawing on those two invaluable years of college Lee was able to prevent academics from interfering with his daily routine. Although he changed in many respects after arriving at the Academy, he remained loyal to his original ambition and Navy Air will soon be gaining a fine young officer. 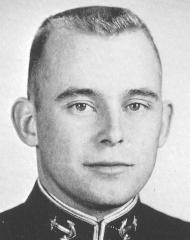 Ken is a native Iowan, born in Red Oak, Iowa. Before entering the Naval Academy, Ken spent a year at the University of Iowa majoring in engineering. At the Academy Ken was very active in company soccer, touch football and softball. He found no trouble with academics, a claim best demonstrated by his high class standing. Ken also possesses a great personality which has won him innumerable friends. Aside from the Academy life, Ken's hobbies are fishing and hunting on the midwest Iowa plains. He also enjoys a varied selection of music. During his four years at the Naval Academy Ken showed a great deal of the leadership and other virtues which will make him an outstanding officer serving his country. 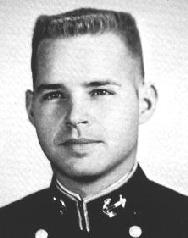 Bill saw the light after a year at Texas A&M and followed his guiding star to Annapolis. Having a good voice, he joined the chapel choir. Since he has some brains to go along with his voice, he tried out for the varsity debate team and made an excellent showing for himself. To take care of his fall and spring afternoons, he became a member of the midshipman sailing squadron. When the Naval Academy Foreign Affairs Conference came to the Brigade, Bill took part and did more than his share to keep the program moving. With his ability to do a good job in so many different activities simultaneously, he will make a good showing in whatever field of endeavor he should choose.