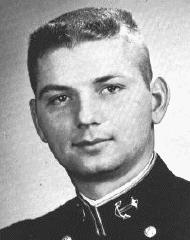 Chris entered Navy after two years in the Marine Corps. "The old Salt" soon discovered age was creeping up on him and retired from varsity competition after playing plebe basketball and plebe soccer; many amazed batters will attest to his pitching ability with a softball. Not being very academically inclined, he placed more emphasis on the extracurricular activities offered at the Academy-namely, the pad. Chris always had a smile for everyone and an attitude that will make him a welcome addition to any wardroom. 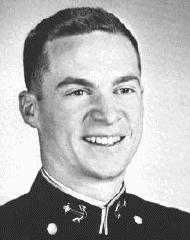 Bill made the switch from "barefoot boy in blue-jeans" in the hills of Tennessee to a "middie" with ease, just as he has been successful in everything he has attempted. He put aside his normal slow moving, easy going manner when he got on the athletic field and was a driving, constantly hustling player on the intramural soccer, football and lacrosse teams. An ardent lover of the outdoors, Bill was always eager to return to the fields and streams of his home state at every opportunity. Neither academics nor girls were a problem for him, and he spent much of his free time plunking on a guitar and singing in his colorful southern drawl. Bill's smiling, sparkling personality won him many close friends at the Academy and will continue to win him friends wherever he goes. The land of mountain men and moonshine whiskey made a valuable contribution to the Naval Service in the form of Bill Cole. 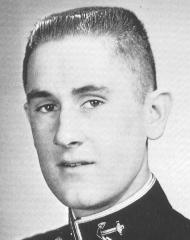 Denny came to these eastern waters after six months at Los Angeles City College. A serious countenance and a straight-forward outlook at his duties made him a good plebe and paved the way for a successful three years as an upperclass. A person who took his academics seriously, he studied and worked with diligence. Believing that there is a time to work and a time to play, he enjoyed his leisure with his stereo and idyllic afternoons in the pad. General competitive sports were favorites with this tall Californian and basketball headed the list. He represented the intramural cage teams well. A strong believer in the extra things that can be learned here at USNA, Denny gained the respect of all through his personal bearing and character. His friends look forward to seeing a long, rewarding career filled with all the challenges for which he has ably prepared.