Hank, a native of Paramus, New Jersey, moved into academy life and was soon caught up in the sports field. He repidly made his mark in baseball and was a steady member of the pitching staff. Besides baseball all Hank could think of was tubes and radios. Needless to say the Electrical Department never gave this boy any trouble. Early in his stay here Hank became a member of W3ADO and began to haunt the radio shack regularly. Hank was also on the company cross-country team, but somehow always avoided running in a meet. Every Sunday morning Hank gave the folks in town a chance to hear his "wonderful" voice by singing in the church choir. 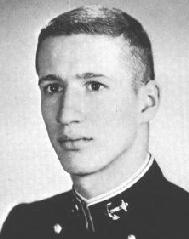 "Karpy" came directly to the Severn's shore from Lorain High School in Ohio. During his plebe year he earned a starting berth on the plebe basketball team and then moved up to the varsity the following year. During the fall and spring, Bill could be found on the tennis courts or lending support to the company softball team. Second class summer stimulated his interest in the field of aviation into which he hopes to enter. 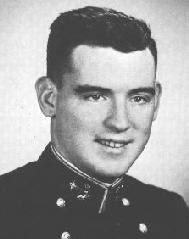 Steeped in Naval Tradition at home, Bernie thought only of becoming a naval officer. During his high school days he strove toward achieving this goal by directing all his energies towards acceptance at the Academy. After succeeding in this respect, his tireless energies had just begun to be expended. His dedicated seriousness in the academic field has inspired many a classmate to higher goals. In intramural athletics, Bernie was always a leader. His quick talents as an athlete enabled him to excel in numerous and varied sports including basketball, football, and soccer. But his prowess in these many diversified activities was overshadowed by his inspiring attitude, his magnetic personality, and his dedicated nature. Armed with these enviable qualities, Bernie should never have any trouble coping with the many challenges that will face him as a Naval officer.