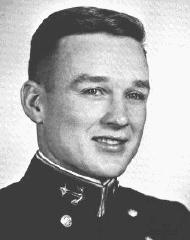 Denny sailed to Severn's shore after a year's tutorage at UCLA. With a twinkling eye and devilish smile he took to storms of plebe year in stride, making the sternest upperclass eye turn. Savvy in his subjects, he had no trouble with academic life. Being one of those rare souls enjoying academic visits to the science building, Sampson Hall, his greatest interest is in math and science. Denver believed a strong body should house strong mind; his physical fitness programs, boxing and gymnastics being his favorite sports, are remembered by many. These were interspersed with periodic afternoon longings for the pad. Social life was not forgotten either; with a fun-loving spirit he was ever ready to meet and rise to any occasion that presented a fair young damsel or a good party. Denny faces the fleet and the future with a secure background and a ready assurance of a full, rewarding, and successful life and career. 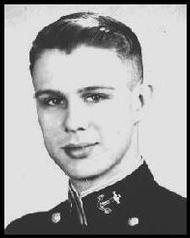 George came to the Academy after attending Midland College for two years. Plebe year found him contemplating his disillusionment of being another John Paul Jones. On Youngster cruise he obtained the distinction of being one of the few midshipmen who got seasick on an aircraft carrier. George finally decided to join the Drum & Bugle Corps during Youngster year. He did quite well due to his drumming ability and musical interest. At TRAMID George finally found a suitable military occupation playing Marine on the sand dunes of Little Creek beach. He was affably called "Rip" by many of his classmates because he spent his spare time sleeping. No matter what branch of the service he joins, George will be an outstanding officer due to his personal pride and sense of accomplishment. 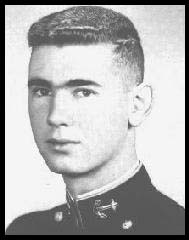 A former Nittany Lion, Ed, or Eddie as he is affectionately called by some, finally saw the light and journeyed south to join the ranks of the Brigade of Midshipmen. Ed, who was the toast of the flight instructors during second class summer, plans to follow in the footsteps of his brother, and pin on Wings of Gold soon after graduation. After starring for two years on the company cross-country team, Ed decided that his old frame was getting too decrepit to complete that grueling round-trip circuit any more. To remedy this, he went out for a less strenuous sport, company soccer ( ?). While at the Academy, Ed was never one known to be exactly wild about the books, yet maintained above average marks.