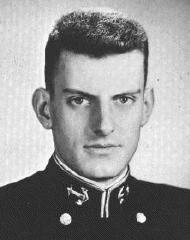 Frank's Academy years were typified by an incident that occurred plebe year: he broke his slide-rule on the way to a math re-exam! He managed to survive, however, and earned quite a degree of fame, due primarily to his being mistaken for Tecumseh. Academically, Frank did rather well, considering the fact that he became the first man to trod the yard for four years never realizing his slide-rule slide was in upside down. His athletic record mirrored his other achievements, but it can be said that a lot of his time was spent on the playing fields of Navy, building character. Second class summer was passed here on the shores of the Severn coaxing the new plebes into military bearing. Above all, Frank's sincerity and his deep desire to do the job well and to do it completely will earn him admiration and trust throughout his military career. 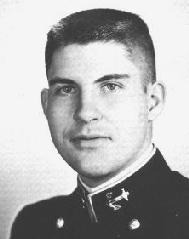 The southern gentleman in every sense of the word, Milt is an unassuming, steady man who can be counted on to give all of himself to any task he undertakes. Being very thorough, he hates to rush through a job to get it done, but he never leaves a job unfinished. In his first year at USNA, Milt was on a couple of plebe sports squads, but during his last three years he dropped his interest in varsity sports to contribute to the company and battalion teams, where he was always a valuable asset. Milt is not only a man who thinks for himself; he is a man who thinks of others, and he has the insight into human nature that is so necessary to a good officer. With his unfailing patience, understanding, and capacity for hard work, he will be a valuable addition to the commissioned ranks of whatever branch of the service he chooses to join.