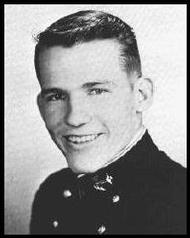 Pete took his time getting to the Academy. After graduating from New Mexico Military Institute in 1957, he attended Bullis Prep as his next time-waster. He failed to make it in from Bullis, and so fraternity and college life seemed like the next step. The college turned out to be Arizona State University. This school is well-known for its party life, and Pete was not one to pass up a party. By the end of the first semester he had had enough school. It was while a fireman in Scottsdale, Arizona, that he passed the Academy entrance exams. Plebe year Pat spent most of his time with 150# football and indoor and outdoor track. Pete's final two years were relatively uneventful. He lettered in 150# football and spent some time with the afternoon "drill team." After he makes his service selection, Pete is willing to let the chips fall where they may. 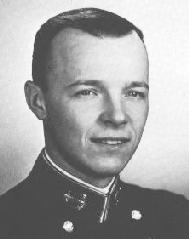 When Scotty made his first journey to USNA from his native Garfield, he brought with him a fine record of achievement compiled throughout his high school career. In the next four years this record was extended unbroken. Here he proved himself both an athlete and a fine scholar, standing near the top of the class every semester. Scotty wore stars both on and off the athletic field. Although starting his plebe year as a boxer, he later switched his interests to intramural sports where he was outstanding in both company soccer and softball, as a member of several championship teams. Scotty's agreeable attitude and sense of humor have brought him many friends here and coupled with his leadership qualities have ranked him outstanding in aptitude. It seems certain that whatever service Scotty chooses, it will benefit from the qualities which place him so high in the esteem of his class. 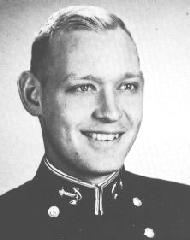 Tony, the quiet boy from the Canal Zone, was born in Cairo, Georgia, where he lived for six years. From Georgia, he moved to Palatka, Fla., and six years later, moved to Panama. He graduated from Balboa High School there and then embarked upon his career in the Navy. His sport is crew, and upon this, he expends a prodigious amount of energy, always striving to pull a little bigger "puddle" and to go a little further. His easy-going manner and genuine friendliness has won him the respect of his classmates and friends and will undoubtedly continue to do so long after he has left the Naval Academy. No matter where he goes, he is bound to add something to the organization.