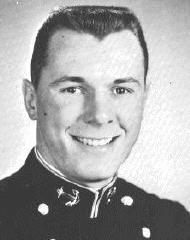 Ron came to Annapolis with an outstanding high school record in both academics and athletics. At St. Joseph's Prep in Philadelphia, he starred in baseball as a pitcher and football as a quarterback. Here at the Academy he has continued his outstanding record. Plebe year he was a standout pitcher for the baseball team as well as being quarterback for the plebes. As an upperclassman, Ron has worked his way up to being Navy's quarterback. Academically, he has a fine record, being on the Superintendent's List several times. All is not work with Ron, as many of his friends know from second class summer. "Hot Dog's" social predicaments have given us many a laugh. He has succeeded in all fields of endeavour thus far in his career and is defintiely headed for success upon his commission. 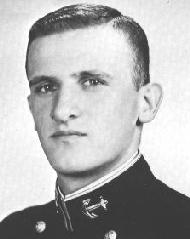 Bob comes from Trenton, New Jersey, where he stood high in his high school class and played football. At the Academy he spent most of his free time involved in some sort of athletics. He participated in varsity 150 lb. football, rowed crew, ran cross-country, and played softball. Concerning his softball experiences, he likes to tell old grads he played in the middle of Dewey Basin. His classmates expected him to organize a polo team or even a cricket club. Bob didn't spend all his time at sports; he also belonged to the Foreign Relations Club, Newman Club and had smooth sailing in most of his courses. With all his varied talents, the respect and admiration of his classmates will surely carry over to his men and make him a very effective officer. 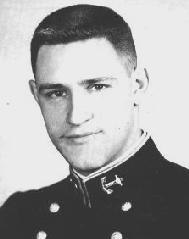 Don came from the humid city of Chicago to the even more humid town of Annapolis via Ithaca, New York, where he spent a year at Cornell University working toward a major in Electrical Engineering. Here he changed his major to Math. Always interested in sports, Don went out for the wrestling team in plebe year, but has since limited his sports efforts to intramurals. After convincing his company officer youngster year, Don was finally able to get his stereo rig approved, and it proved to be his pride and joy for the remainder of his stay at the Academy. Don's extracurricular activities were mainly with the <I>Lucky Bag</I>. He also had brief memberships in the Foreign Relations and German Clubs. Never worried about a passing grade, Don made frequent visits to the Superintendent's List. His goal is a career in the nuclear submarine fleet. We know that he will do as well in all his endeavors as he was able to do here at the Academy.