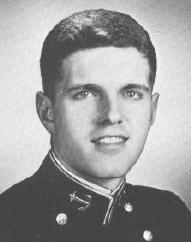 "Bo" arrived at Navy after spending a year at Marion Institute. Plebe year didn't present too many serious problems. However, being a true son of the Condederacy, his main obstacle was trying to convince the upperclass of the South's victory over those people north of the Mason-Dixon Line. Although it was a losing battle, he fully made up for it after becoming a member of the upper strata. Besides studying, "Bo" spent his free time in various extracurricular activities, among them ocean sailing and pursuing members of the opposite sex. Although not a staunch militarist, Bo will be rembmbered by his classmates for his quick wit, especially since it popped up constantly during study hour, and his sharp attitude. After graduation, "Bo" plans to wear Navy wings of gold. However, no matter what branch he chooses, he will be a credit to the Brigade, his service, and his country. 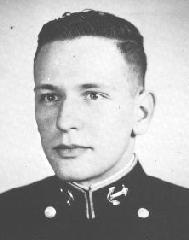 "George" came to the Naval Academy from the "Dairy Land" via the physics classes of Wartburg College. He always had an intelligent opinion on any subject and found himself answering his classmates' queries on various problems. He had only two major difficulties during his stay at the Academy. He dispensed with the first after the German final youngster year and the other as he accepted the inevitable, his nickname, after everyone, including his family, decided that he looked like a "George." Among his sports activities were battalion and company football, softball, and volleyball. He was also active in the Masqueraders and the Reception Committee. With his ordered mind, versatility, and determination to do a good job, George will be a welcome addition to the Navy. 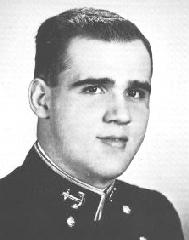 Rick attended Columbian Prep School in Washington, D.C., where he played both football and basketball and served on the Student Council. Evidently he was prepared very well both academically and athletically. While at the Academy he maintained an above average academic standing and participated in varsity football and plebe lacrosse as well as intramural basketball. Because of a recurring knee injury, Rick had considerable difficulty in his athletic endeavors here at the Academy. In what spare time he ws able to find, he enjoyed collecting and listening to jazz recordings. Rick is happiest when he is either hunting and fishing or boating during his leave time. His many wide and varied interests and his easy manner have accumulated for him his many friends throughout the Brigade. With his air of self-assurance, Rick has the respect of all his classmates. We wish him continued success and the best of luck in his future service, whichever branch he may choose.