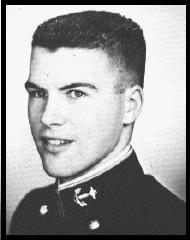 One of the most competent men in his company, "Skip" amazed everyone with his sincere friendliness and enthusiasm. He was the Concert Master and Band Librarian of the Midshipmen's Concert Band and a member of the varsity Ocean Sailing Squadron. Sailing was his big sport at USNA, as was always readily evident from the number of sailing pictures posted about his locker and room. Two of the highest points of Skip's sailing career were his participation in the Annapolis-Newport and Bermuda races aboard Navy's schooner "Freedom." Next to sailing, Skip's favorite sports are swimming. skiing, and tennis. He was also a member of his company cross country team, the Musical Club shows, and the Space Club. "Skip" displayed a great love and a solid background in music. His colossal stereo rig and his collection of records could be matched by few midshipmen. "Skip" looks forward to the golden wings of Navy Air. 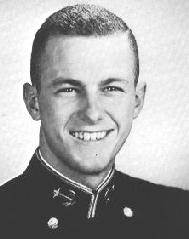 Fred came to the Academy from Arcadia, California. While at the Academy Fred participated on the various track teams. Plebe year he won numerals in both cross country and track as well as acquiring a broken foot. Youngster year he was on two championship teams, fall cross country and battalion track, going undefeated in the mile run for the latter. Plebe year Fred got his stars, and youngster year he was on the Superintendent's List. To round out his Academy training, Fred was a member of the Russian Club, Foreign Relations and Public Relations Clubs, and the NACA. In whatever field he chooses Fred's natural abilities, fine personality, and willingness to get the job done will make him a welcome addition to the Navy.