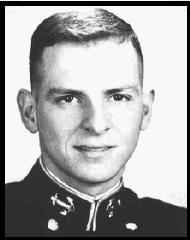 After spending a year at the University of Tennessee, "Willy" left Harriman for Severn's shores. While at the Academy, "J. C." vigorously applied himself, and in addition to having been on the Superintendent's List, he was famous for his 4.0 on the strength test youngster year. A rugged competitor, he was a stalwart member of company and battalion sports squads, including cross-country, track, football, squash, and soccer. "Willy's" tour of northern Europe during leave of second class summer was one of the high points of his midshipman life, even though his renowned proficiency in Russian did little to help him in Paris. Always ready with a homespun southern cliche, "J. C." was warmly regarded by all for his sense of humor and willingness to help others. All signs point to a successful future for "Willy" in whatever branch of the Navy he chooses. 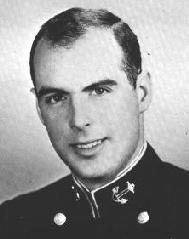 Dick came East with two years of college under his belt. A true Kansan in every sense of the word, this Jayhawker soon developed a keen appreciation for the sea-going life. He was one of eighteen to spend youngster cruise aboard the squarerigger "Eagle" bound for England. An ardent runner and track fan, Dick sprinted the cross-country team to many a victory. Battalion squash and tennis, the Log, photo club, and amateur radio station W3ADO helped occupy the rest of his extracurricular time. Even though he studied electrical engineering before entering the academy, Dick felt that the academic strain and grades never came as easy as his friends. Energetic and likeable, Dick will be long remembered for his contributions, humourous and professional, to the Brigade. 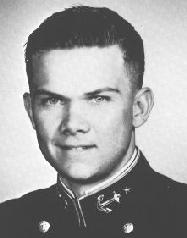 Hailing from sunny California, Ray came to the Academy with a keen mind which proved more than able to cope with the awesome load provided by the Academy. Besides his outstanding academic performance, Ray distinguished himself in intramural sports before he discovered his love for sailing and became an active member of the ocean sailing squadron. He could always be counted upon to give a hand to any of his classmates in need of academic help. Even with his full schedule he still found time to participate in the many social functions in and around the Academy. On the weekends Ray could be found in the company of his many friends, both male and female. Because of his keen mind and congenial personality, Ray is sure to distinguish himself in his military career.