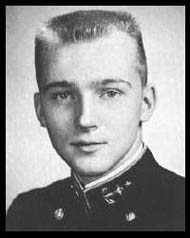 Terry came to the Academy after completing one year as an engineering major at Purdue University, and consequently, was able to validate almost half of his plebe year academics. He quickly adjusted to plebe year and life at the Academy. His determination to excel led to a high academic average, and his athletic ability enabled him to play a prominent role in his company's intramural sports. His primary extracurricular activity was editing the Four Years section of the 1963 <I>Lucky Bag</I>, but he also found time to act as repairman for almost any electrical appliance. Furthermore, he was rarely without a date on the big weekends. Terry has not yet decided whether to pursue his service career in Navy Air or in the Nuclear Power Program, but his ability to accept responsibility and to carry out orders ensures his success in the Navy. 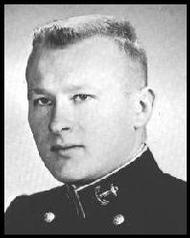 Andy must have felt that opportunity was limited in his native Kimball, so he enlisted in the Navy and advanced in three years to aviation electronics technician second class. During this time he saw a good portion of the world aboard the U.S.S. SARATOGA, attached to VAH-9. After a short stay at NAPS, Andy began his tour at the Naval Academy. During plebe summer he made a quick try at football, but his interest finally settled on ocean sailing. When winter rolled around, Andy could be found on the basketball court in the afternoon, fighting valiantly for one of the losingest teams on record. With the return of spring, though, he was back to the yawls. After such a long stretch with Navy Air, Andy is really sold on flying. We are sure that his future will be of such brilliance as to merit much mention in the Brule County News. 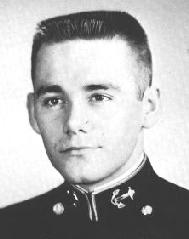 When asked if he cares for his nickname, Gary replies; "Why shouldn't I? As long as I've been in the Navy I've been known as 'Baldy'." Gary's Naval career started when he left his northwoods home and went to sea on an aircraft carrier. From sea, duty Gary went to NAPS, where he received his appointment to the Naval Academy. In four years by Severn's shores, Gary has put his Naval knowledge to good use. He has been one of the outstanding leaders of his class. Yet "Baldy" has also found time to play varsity lacrosse, which he discovered at NAPS, and to maintain a respectable grade average. During third class year Gary was chosen to attend the Air Force Academy on an exchange weekend. He spent his second class summer on the Plebe Detail. The Brigade will be on the losing end as "Baldy" throws his cap into the air at graduation, but the Service will indeed benefit in many, many ways.