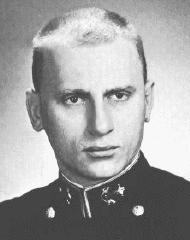 Never really certain of his future while still a barefoot boy in Indiana, "Satch" finally corralled his thoughts and after one year at St. Benedict's College decided upon a seagoing career. Using the same energy and initiative which have become so familiar to those who know him, "Bomber" obtained his appointment to the Academy and set about establishing his future. Once inside these immortal halls, Satch decided. to concentrate his efforts more upon athletics than upon mental gymnastics. Through the concentrated efforts of many, he proved his supremacy over the academic curriculum and succeeded in making the grade. On the sports scene, his efforts were more rewarding, both in 150-pound football and lacrosse. He gave his all and helped to make the teams national champions. We are sure that "Satch" will show this same determination when he goes to sea. In "Satch" the Naval Service has procured another capable and respected officer. 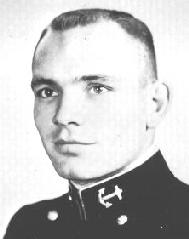 "Travo" or "Board", as his classmates sometimes called him, hails from Kilgore, a small oiltown in East Texas. After high school, where he excelled in athletics, Travis attended Kilgore Junior College. Upon entering the Academy, he found himself swamped with academics, not being a "slash" by any means. At USNA Travis participated in a variety of intramural sports, including football, softball, volleyball, and swimming. He also spent one fall on the varsity 150 lb. football team but found the usual problems of keeping weight down and academics up too strenuous a task and was forced to give it up, despite his player potential. Travis was very much respected by his classmates. His witticisms and injected oral observations proved him to be a person of humor and earned him the title of "The Country Philosopher". His humorous Bancroft Hall antics coupled with his selfpride and profound depth of character make Travis a most memorable classmate.