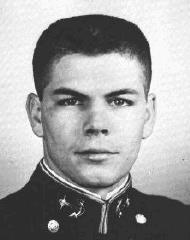 Wyatt came to USNA via the US Marine Corps. Being no slouch when it came to studies, "Butch" took full advantage of the validation program, putting some of his former education to good use. He was good at athletics, as he proved by standout performances in both plebe summer boxing and battalion boxing. On any given fall afternoon, one could find him right in the middle of things on the Hospital Point gridiron. However good he may have been academically and athletically, he had two other attributes which far outshone his other achievements. The first of these was raising heck, a good example of which occurred when he flew a kite out of his third deck window during study hour one spring evening during youngster year. Butch was also noted as being a sponge when it came to beer consumption. His winning personality and endless sense of humor, plus his grim determination, will carry him through any situation he may encounter. 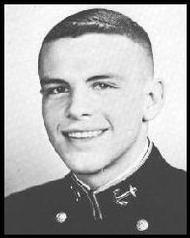 John, hailing from "God's Country" in Big Rapids, Michigan, came to the Naval Academy after compiling quite a record in high school as a tennis player. At the Academy John continued to display his overall versatility in all phases of midshipman life. He was a member of the plebe tennis team and continued to swing a mighty racket leading his battalion teams to victory each year. During the winter, John tackled one of the toughest sports at the Academy as he played rough and tumble fieldball. Running the cross-country course is easy work for "J.B." during that season, and his love for exercise labelled him as one of the few second classmen in the history of the Naval Academy to actually volunteer to run anywhere. He was also an active member of the Brigade Activities Committee. We are all sure with his potential and drive John's future will be spectacular for both him and the Navy. 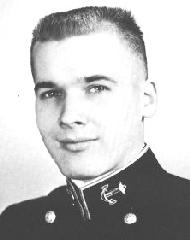 Doug is a native of the Golden Gate County, San Francisco, but due to the fact that he is a Navy junior, he is equally able to call both coasts home. With the Navy as a background he found no great difficulty in adjusting to the ways of the Brigade, and in his four years he made many significant contributions to the Brigade. His musical abilities made him a stalwart of the Drum and Bugle Corps, and he was also a leading member of the Concert Band. Afternoons found him participating in such various intramural sports as cross country and squash. An avid reader, he could often be found expanding his literary knowledge with a good book in hand. Doug's level head and good nature made him a friend to all he met, and all that know him are certain that he will be a great asset to the Navy.