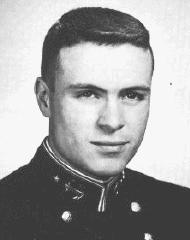 Upon his arrival on Severn shores, Clint, known throughout the Brigade as "The Square Bear," quickly joined the staff of WRNV and his rock and roll music kept the Brigade jumping. Besides spending much of his time at WRNV, he was on the staff of the Naval Academy Foreign Affairs Conference, a member of the Portuguese Club, and a member of the Reception Committee. He was also an active participant in the Brigade intramural sports program. In spite of his heavy extracurricular schedule, Clint found time to overload in Literature, make the Superintendent's List, and wear academic stars. Those who knew "The Square Bear" best will remember him for his quick laugh, his ready wit, and his Saturday night rock and roll blasts. He also has the distinction of being the only member of the class of '63 who wanted to get Ray Charles and Chuck Berry for the Ring Dance. We see a long prosperous career ahead for Clint. 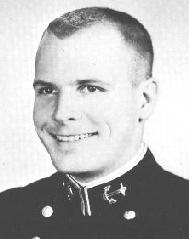 Dick entered the Academy fresh from the fraternity life of Pasadena City College in sunny California. It was natural that he was bound for many changes both weather-wise and otherwise. He had never experienced snow or other things unique to the Naval Academy. However, Dick was able to hurdle these obstacles with relatively little trouble and went on to become a standout during his plebe year as a member of the plebe tennis team and later as a member of the varsity team. Being extremely interested in extracurricular activities, he also served on the Reception Committee and was a member of the Portuguese Club. Dick's quiet, friendly personality has become known throughout the Brigade, as well as to the fairer sex outside the Brigade. On any weekend it was possible to find Dick escorting a charming girl or girls. 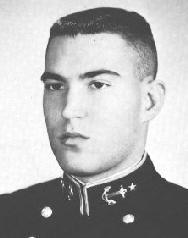 Larry was born and raised in Forest Hills, Queens, one of the five big boroughs of New York City. Coming to the shores of the Severn right from high school, his academic and athletic training was immediately put to good use. Larry has been consistently on the Superintendent's List, and he earned his stars his Youngster year. During outdoor track Plebe year, Larry pulled his thigh muscle badly and was out of action for over a year. Meanwhile, he actively engaged in company intramurals. His ability to make friends and his desire to succeed should insure him success in the years to come.