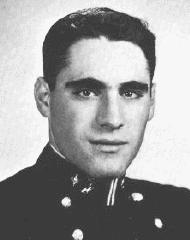 Fresh from one of the high schools in Boston, John was soon known as the big" lovable Italian. Determined to do well at the Naval Academy, he spent much time on his studies, which resulted in success in his academic part of life. But all work and no play was not the life for John. One of the livelier sparks in the company, his constant energy and terrific sense of humor never failed to cheer those around him. Although a constant supporter of civilian line, John is a certain thirty year man for Uncle Sam. The military will eagerly accept men like John, who, besides being efficient officers, are indispensable for the morale of their men. 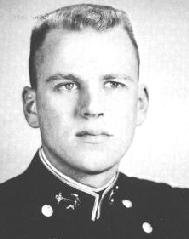 After a half a year at Monmouth College and a year at NAPS, Harry came to the Academy with high hopes and a determined spirit. His personal smartness is an example of the high quality that can come to the Naval Academy from the fleet. Harry has not limited himself to any one sport. His many likes include knockabout sailing, basketball, and wrestling. He was a member of the Plebe Soccer Team, but his main interest remains with basketball. Whether playing for his company or watching a varsity game, he has been a staunch supporter of Navy basketball. Harry's quick wit and joking mood has helped him and his classmates through the long, serious weeks of academic studies. Very easy to get along with, he has won himself many friends here at the Academy. Looking to the future, Harry has his mind set on a career in Naval Aviation.