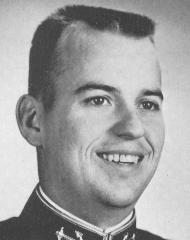 Tom came to the Academy from Oklahoma State, where he spent one year. Born in Barnsdall, he developed the athletic qualities that, added to his outstanding scholastic aptitude, made him well known among us. Flying is Tom's golden dream, and his keen interest in aircraft made his second class aviation summer the most enjoyable experience the Academy could offer him. Academics always had high priority in Tom's schedule, but he never failed to find some extra time for a sporting contest - football and basketball being his favorites. This, however, never kept Tom from enjoying a long sleep. He always defended himself with the powerful argument that he was "The tiredest man in the world." A bright future lies ahead of Tom, whose fitness all around is proverbial. His even temper and congeniality will keep a circle of friends that will always welcome his arrival. 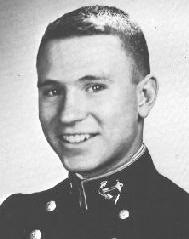 "Always on the go" best describes Bill and the active life he leads. Being a Navy junior was the only primer he needed on November 14, 1941, in Hawaii to start him on a life which has led him thro-gh many countries and into many friendships. "Hans from Norway" also has an interest in Guam, France, and "Good Ole' Virginny," which he calls home. Bill's brother Gil (Class of '60) started him on the right foot at the Academy and made certain that his interests were diversified: the Chapel Choir, the 150# crew team, the Foreign Relations Club, and company football. With a smile for the boys and a line for the girls, Bill manages to find his way into the most fantastic situations imaginable; all of which seem to turn out for the best. After a long and eventful career in the Navy, Bill will be able to look with pride on his days at the Naval Academy as a Midshipman. 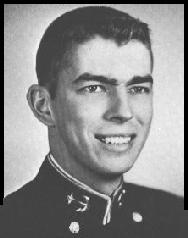 "Harv" came to USNA from good old Virginia still fighting the Civil War. As early as Plebe summer, his Yankee classmates found it hard to understand his southern drawl, but his slow manner of speaking soon won many friends. Having had one semester at Roanoke College, he had little trouble finding his stars Plebe year, and he has been looking for them ever since. Being fond of good music, he soon found his place in the Antiphonal Choir. On any given afternoon he could be found participating in intramural sports or sleeping. Naval Aviation is his favorite and he looks forward to a long career in Anti-Submarine Warfare.