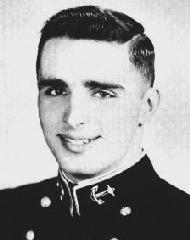 The enchantment of the sea captured the heart of Roger Milos, a Midwesterner, while he was still attending high school in Biwabik. Graduated as salutatorian of his class, be proceeded directly to USNA, where through hard work, he was able to maintain his high academic standing. Roger's great ability for long and intelligent conversations soon brought him many friends. Participation in the Catholic Choir and the Newman Club occupied much of Rog's free time, not to overlook those nightly phone calls which became a regular occurrence during youngster vear. His interests have been wide and varied as shown by his participation in a variety of sports at the academy. Roger's keen mind and strong sense of values will assure him of a successful career as an officer. 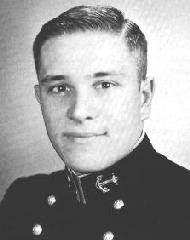 Charlie came to us directly from Washington-Lee High School. A member of the National Schoolboy Champion crew at W-L, Charlie continued his pursuit of this sport here at the Naval Academy and earned his laurels pulling in the varsity boats, During the winter Charlie played basketball and football. One of his outstanding characteristics was his refusal to submit to boredom, regardless of the circumstances. This was partly due to his enthusiasm, but mostly it was a result of his unlimited ingenuity. His father's assignment as Commandant of Midshipmen during second class year provided him with many interesting situations, and his classmates, plenty of ammunition for good-natured kiddings. His good-natured disposition and smile will be welcome wherever he goes and will assure the success he richly deserves. 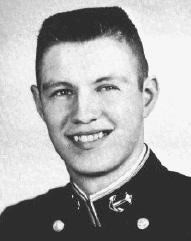 A native of the "Land of Lincoln," Wayne came to USNA with enthusiasm and an interest in all facets of the Navy. Known for his love of the water, he focused his athletic endeavors on the aquatic sports including battalion and Plebe swimming, water polo, and varsity swimming. A quiet and serious individual, Wayne is also known by his many friends for his cheerful and friendly attitude. When not at the pool, he can be found writing letters to the music of a well-used stereo. Because of his leave-time travels, sincerity with the gals (many of them), and his interest in new faces, letter writing has been an occupation born of necessity as his abundance of mail from all parts of the country will testify. For a career in the service Wayne has chosen Navy Line.