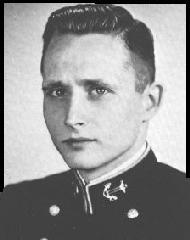 After two years at Rutgers University, Bill joined the Navy to see the world. His world soon became limited to the Annapolis area when the Navy realized his potential as an officer. While at the Academy he became a member of the Naval Academy sailing squadron and participated in several ocean races. The combination of his friendly personality, wit, and all around capabilities will certainly carry Bill far in his chosen field. Whatever he does, Bill is not the type that needs to be wished luck as he makes his own wherever he goes. 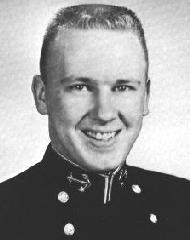 Hoquiam's loss was the Naval Academy's gain when "Nellie" reported to Annapolis after graduation from high school. His cheerful personality was soon evident, and he became known as the only man to laugh his way through Plebe Year. His diversity was seen in the intramural sports program, where he bolstered battalion and company teams from basketball to badminton. His enthusiasm for sports spread to the P. T. Department, where he was seen in a 15 round bout with Dave Greeneisen with the winner receiving an "oscar" for his performance. Academics never seemed to present a problem to Wayne, and he astonished his classmates with the amount of effort he put forth in this field. His winning personality marks Wayne as a man to win friends and influence people both while at the Academy and in his future years. 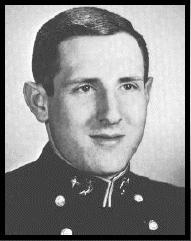 "Newt," as he was known to his classmates, hails from Ashville, Ohio. Before entering the Academy, "Newt" spent a year at Ohio State University and then entered the Navy, which sent him to NAPS to prepare him for the entrance exams. Prior to entrance and during his Plebe year, Bob played football. He is known for his slow, consistent bridge game and for his great speed in distance runs for the company cross-country teams. He also plays fast games of squash and handball. An avid follower of the stock market, Bob hopes to make his money from stocks while he carries on a successful career in the Navy.