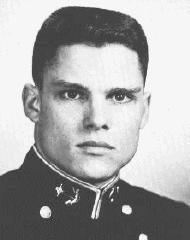 Bill entered the Naval Academy right out of high school from the mountains of Pennsylvania. Primarily interested in sports and physical education, Bill participated in a great number of athletic activities. While having a strong will to win, Bill was a little low in the weight department, so he played varsity 150# football, and was very successful in that endeavor. With his highly competitive spirit, Bill rounded out his sports by wrestling during the Winter. He had a little trouble with academics, but still found time to participate in the activities of the Naval Academy Christian Association and the Italian Club. 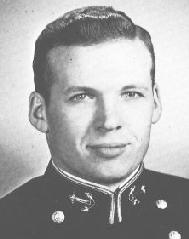 Bill came to the Academy from Bettendorf, Iowa, but now claims Wisconsin as his home. In high school Bill spent his fall days on the football field. A portion of his spare time was consumed on the tennis courts, a pastime he still pursues. Right after he arrived, Bill dug right into the academics and after two years of outwitting the other side of Maryland Avenue, he attained a high scholastic level. Besides studies, Bill also found time for the Naval Academy Christian Association and the Spanish Club. An outstanding runner for the company cross-country team he also played fieldball and softball. His hobbies included fishing and hunting (girls, that is), and to these he devoted a major part of his leaves from U.S.N.A. His scholastic ability and determination should make him a top career officer. 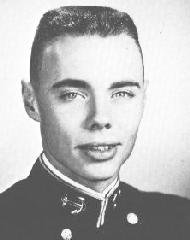 The best description of this native New Jerseyite is to call him an all around Midshipman. Academic-wise, he has consistently demonstrated above average ability by maintaining a Superintendent's List average throughout his stay at USNA. Paralleling this academic ability is the athletic prowess demonstrated by Mal in the Physical Education Department and on the intramural field. His competitive spirit and excellent sportsmanship both on and off the field have made him a credit to his company and, even more important, to the Academy. The esteem with which Mal's classmates hold him is shown by the fact that he was elected to the Honor Committee. This distinction is a clear vote of confidence in his leadership ability. This attribute, coupled with his ability to make warm and lasting friendships, will stand Mal in good stead throughout his Naval career.