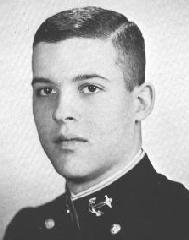 A product of South Dakota's Black Hills, Jim decided to see the world early. Jim arrived on the Severn with a camera on one shoulder and the ability to sleep anywhere. Jim provided constant amazement for his instructors, who could not figure out how he could pass quizzes with high enough scores to make the Superintendent's List, never having heard a word of explanation in the classroom. After classes during plebe and youngster years, Jim could be found in the natatorium as a member of the battalion swimming team. Spring of youngster year saw Jim turn his attentions to the water in the Severn, as he became a member of the ocean sailing squadron. After hours, Jim's record collection provided the atmosphere he needed for his pursuit of sleep. Jim will be remembered for his willingness to help out In any circumstances, especially classmates having academic trouble. 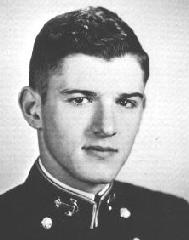 From the fabulous first state of Delaware, Ron Wills of Conrad High came to the Naval Academy. With a good start at the Academy by being in the winning battalion plebe summer, he entered plebe year. One of the youngest members of his class, easygoing Ron participated in company sports, maintained a 3.2 average, and was an ardent supporter of the Navy football team. Outside of pretty girls, he likes playing bridge, basketball, and drums. Although undecided as to his career upon graduation, Ron's sense of humor will most assuredly help him to be a success whatever line of the Navy he chooses. 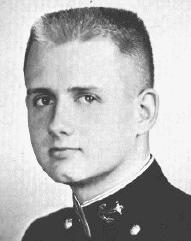 Hailing from the mountains of southern New York, Gary arrived one sunny July morning to greet with open arms the sun-drenched shores of the Severn. Finding the life of a Midshipman very much to his liking, "Peaches," as he soon became known among his classmates, at once turned his every effort to building the fine record he is leaving behind. The rigors of this unusual way of life had little effect upon the determination and the will to succeed, which he brought with him from Binghamton. Two summer excursions to Europe established "The Peach" as a world traveler, but each September, upon his return to us, he became a common sight upon the fields of intramural soccer. In addition to time spent on the varsity rifle team, Gary furthered political science, his main interest, by a membership in the Naval Academy Foreign Relations Club. This warm and likeable guy is sure to become one of the finest Naval Aviators in the service.