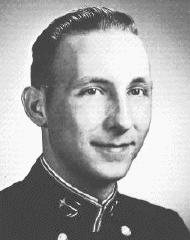 Rod is an easy going rebel who came to the Academy with an insatiable appetite for sleep, food, and practical jokes. His many activities as secretary of the Brigade Activities Committee, the Ocean Sailing Race Committee, and the W3ADO Radio Club would have crushed a lesser man. Rod found ample time to drag and compile record amounts of pad time. Studies never presented a problem to Rod; his grades seemed to prove that his method of studying by osmosis was effective. He always took an active part in sports, lending his talents to the rifle and company cross country teams in the winter and sailing in the fall and spring. In his years at the Academy, Rod made numerous friends and a record which leaves no doubt that the Navy will be gaining a very fine and capable officer upon his graduation. 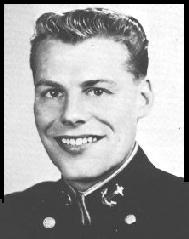 Young Jack is numbered among the alumni of NAPS and entered the Navy originally from his natural environs, the sovereign state of California. The nickname by which he is most widely known is "Fish" the derivation of which rests ostensibly in his swimming and skin diving abilities. Fish's signal contribution to Academy life is musical ability. Officially he sings bass in the antiphonal choir; unofficially he flails away, rather respectably and to the delight of all within range, on the bongo drums. Fish also numbers among his accomplishments a year with the ocean sailing squadron and four years to the battalion handball team. Fish's verve, spirit, and humor promise to make him a man respected and an officer of note. 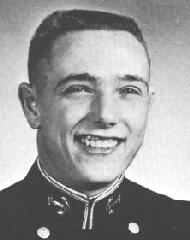 Following graduation from Baldwin High School, Dick headed straight for USNA to trade civilian line for the Navy Blue. After classes one could find Dick in the wrestling loft with the varsity squad or on the softball diamond, but his favorite sport was dragging one of his many "one and onlies". Academics came easy for Dick as evidenced by his consistent Superintendent's List marks. Youngster cruise found Dick alongside his twin brother on the EAGLE, training ship for the Coast Guard Academy. Being one for concentrated effort, Dick never wasted his time, most especially his liberty time. Dick's friendly smile and amiable character made him many friends during his sojourn at USNA. These attributes, plus his ability to apply himself to the problem at hand will make him a successful officer and an asset to the Navy.