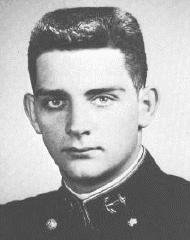 "Ash", who hails from the land of pleasant living on the Eastern Shore of Maryland, came to the Academy after two years at the Hill School. Consequently, Academics came easy. Although his main interests lay in varsity baseball and his girl, he still found time enough to participate in WRNV, the German club, the Foreign Relations Club, and on the Reception Committee. During his somewhat limited spare time, John has cultivated a highly discriminatory taste for "Rock and Roll" a la Stereo. He claimed that sounds help him think. John has gleaned from his avid participation in athletics a tremendous determination to win in any field. This, combined with a constantly delightful personality, forms a combination one must go a long way to surpass. 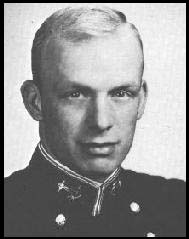 This fair haired lad came to USNA by way of Logansport, Indiana, and the University of Mississippi. Although a Yankee he quickly adapted himself to southern living. At "Ole Miss" he found himself surrounded by lovely women but still found time to study a little engineering. At the Academy Dave has continued his interests in both fields. Dave came to the Academy advanced in both academics and Navy life. His year in college was spent on a Naval ROTC scholarship. He was then able to validate the basic curriculum and take advanced courses in engineering with hopes of a major. Despite his heavy academic schedule, Dave also found time to be active in sports at the Academy. Plebe year found him a member of the plebe soccer team. Later, he could be seen on the field playing for company and battalion teams. Known for his drive and determination, Dave will make a fine officer. 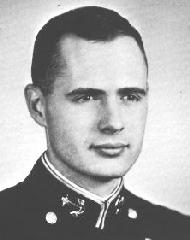 Buzz came to us from the deep southern state of Georgia. A truly devoted Southerner, he considers "Marching Through Georgia" to be in the very worst of taste. After high school, Buzz joined the enlisted ranks of the Army, and after four months, he enrolled at the Military Academy Prep School. A year later we found Buzz a "Ploob" at USNA-a loss for Army, but a real score for Navy. During his four years at Navy, Buzz became a real favorite both of his classmates and of the underclass. Besides battling with Yankees, Buzz found time to join the Foreign Relations Club, sail on the Rovono, and swim on both the plebe and battalion teams. At graduation Buzz has set his sights on the wings of Navy Air. The Academy and the Service both have a right to be proud of this fine future aviator.