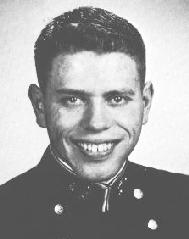 Leaving the campus of UCLA and the brothers of Theta Chi, Lee traveled to the banks of the Severn to join the Brigade of Midshipmen. While attending USNA, he has excelled in both academics and sports. He joined the Foreign Relations Club and was on the Superintendent's List several times. During his Plebe year, Lee played on the squash and tennis teams. In successive years he won several "N-stars" and made a name for himself in these varsity sports. His friends will tell you that Lee can always be seen with a racket! Among his other many and varied interests are math, volleyball, surfing, camping, reading, and dragging. Lee's good humor, conscientious nature, and tremendous drive will surely help him succeed as a naval officer. 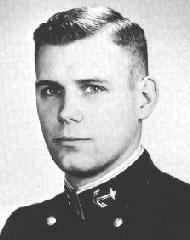 In May of 1959 a choice of location had something to do with "Rocky's" turning down an appointment to the Air Academy, for Annapolis is closer to his two main considerations, Washington (La femme) and sailing. Having sailed since about the age of seven, he naturally reported faithfully as a member of the ocean sailing team. This led up to the "Eagle" cruise as a youngster, and square-rigged sailing ships have been his great love ever since. He recalls the amusing situation of an Air Force officer's opinion on the Colorado-Annapolis question. This officer rec- ommended the U.S.N.A. over the U.S.A.F.A. for its "more rounded professional background." After the first Air Force-Navy football game (35-3, Navy) "Rocky" was more convinced than ever that "his advice" had been right! Hoping to combine batchelorhood with flying, (the former not to last past 28) the future holds the best for this ambitious New Englander. 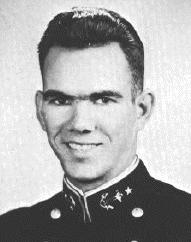 When Ron arrived at Crabtown, he found adjusting to this antique city an easy matter for he hails from our nation's oldest city. He started his trek northward by spending two years at Davidson College in North Carolina, where he was a math and physics major. At the Naval Academy he continued his interests along these lines, taking every math and physics course available. He was also a respected member of the Advanced Science and Mathematics Seminar. His talents, however, are not solely academic, for he has excelled in athletics as well. He tried his hand at a number of sports and became recognized as a fine squash player as well as a standout on many company teams. Ron's ability to make and keep friends plus his driving ambition to do everything right marks him as a fine prospect for a successful Naval officer.