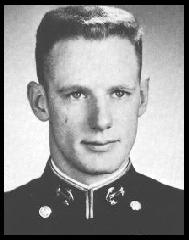 Rich, a devout sportsman and hearty Midwesterner from Illinois, has contributed much to the prestige of the Brigade in his four years at the Academy. Taking up most of his time was varsity basketball, where he used the speed and versatility of his six-four frame to its best advantage. His spare time in the evening was usually spent thinking up and drawing cartoons for the "Splinter". His favorite pastimes included listening to the Kingston Trio and taking leave. Rich has never been known to give up when it comes to any form of competition-be it pool or basketball. His "never say die" attitude developed through a long athletic career will without a doubt help him gain those rungs on the long ladder of a successful career. 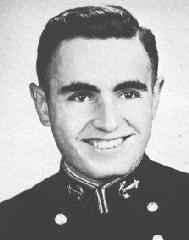 Bill came to Navy from the sunny Southwest, a point he emphasized over and over again. After a year at Navy he was forced to settle down to the life of a midshipman, a life far different from that in West Texas. Being a cross-country runner in the fall, often he would be seen running the hill at Hospital Point. In the spring he made a name for himself in the squash court. His leisure time was divided betweeen women, movies, and answering scores of letters. Not inclined to talk too much, but always ready for a good time, his quiet, easy-going manner gained him many friends. 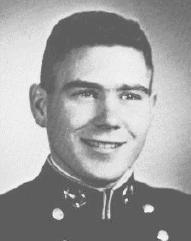 John came directly from high school to the school that seems to be the predestined lot of many Navy juniors. He soon became known throughout the Brigade for his outstanding photography, as his trusty camera followed him wherever he went. John eventually became photo editor of the LOG, the SPLINTER. and the 1963 <I>Lucky Bag</I>. On the athletic side he rowed plebe crew and has participated in many company sports. Although no slouch at grade getting, John proved the old adage that academic achievement varies as the inverse square of rack time. Barring any unforeseen accident John hopes to go Navy Air, and graduation will find him opening a charge account at Trader Jon's while learning to be a jet jockey.