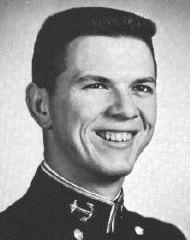 Keith came to the banks of the Severn from the shores of Lake Michigan, fresh out of Lane Tech High School. As the years progressed, he found his greatest adversary in the Dago department. When he wasn't hitting the books or writing letters, he kept himself busy in the Brigade Activities Committee, and the Naval Academy Christian Association, and even landed himself the job of teaching Sunday School. In the afternoon he enjoyed working on the company soccer and battalion lacrosse teams. At first, lost in the tempo of life at USNA, Keith couldn't make up his mind among the many naval career choices, but second class summer zeroed him in on aviation, in which he now hopes to become Navy's answer to Sky King. 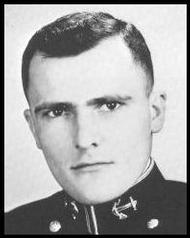 Rick's entrance to the Academy involved a move of only about ten miles down the Severn, however this short distance caused quite a change in his activities. Rick gained renown quite early in his career as a Midshipman when he was christened "Flash," the living legend of the fastest man in the Brigade by a notorious member of the class of '60. Rick, no stranger to the game of Lacrosse when he came here, was quick to put his talent to good use on the varsity squad. Also quite active in intramurals, Rick enjoyed playing company lightweight football but graduated to the heavyweights after Plebe year. On the extra-curricular side Rick was a great asset to the Reception Committee and Foreign Relations Club. Academically his efforts brought him to the Superintendent's List level - he'd do anything for an extra weekend. Rick's capabilities and ability to make friends make him a certain success in whatever field he chooses. 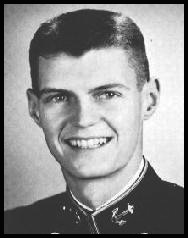 P. V. made the best out of his four years at Navy. Paul was noted for his friendly smile and the ability to say something good about everyone. During plebe year he was a member of the Ocean Sailing Team but gave it up to excel in such company sports as cross-country, boxing, volleyball, and basketball. He also took time out during Second Class Summer to make a trip to Peru to help dedicate the Bancroft Hall of the Peruvian Naval Academy. Hailing from Asburv Park, New Jersey, where he was president of his high school student body and letter winner in basketball, Paul spent many an hour convincing the Brigade that Jersey really is a "hot spot". Paul was a definite credit to the Brigade because of his friendly attitude and winning personality.