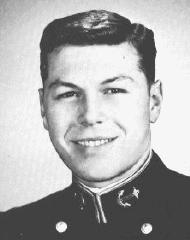 Rube, a California cowboy, set out to see the world via USNA and has been riding tall in the saddle ever since. After a year as a moonlight gambler at the University of Nevada, his experience and easy-going manner eased him through the usual pitfalls and left him plenty of time for athletics and social wanderings. Afternoons found him bolstering the company soccer and football teams, while weekends usually turned his thoughts to the fairer sex. Equally adept on a playing field, date, or with a set of hair clippers, Mike has been a welcome addition to any gathering. Although never one to miss a good laugh, a sense of responsibility and organization, coupled with an ability to make friends, should stand him in good stead in every future endeavor. 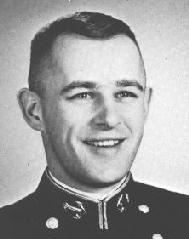 Jerry calls Whitewater, Wisconsin, his home, but his travels before coming to the shores of the Severn make his home and his seabag seem one. He enlisted in the Navy in 1957, after one year of college. Just before completing Guided Missile School, he was sent to the Naval Preparatory School, and his entrance to USNA followed one year later. Jerry, a man of boundless energy, worked it off in many different ways. He was a bulwark of the tenor section in the Antiphonal Choir, an ever-hustling manager of the soccer team, a persistent Log and Splinter representative, and an enthusiastic accordion player. He obviously has found a way to put more than twenty-four hours in a day, for neither his grades nor his harem have been neglected. Jerry's never-failing good humor has stood him in good stead at the Naval Academy. We wish him good luck and success in the future. 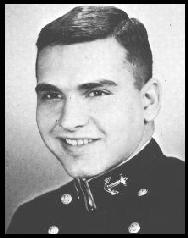 Jack, a true rebel, came to the Naval Academy straight from Jesuit High with a determination to "set the place straight" in his mind. Although he never quite succeeded in doing so, he never gave up his attempts. Academics were no trouble for Jack, and although his grades were better than average, he still found time to devote to the LOG, the <I>Lucky Bag</I>, and sailing. Not one to forget about the finer things in life, Jack is known for being a connoisseur of wine, women, and song, and he can always be counted upon to take part in any merrymaking which may arise. Jack's dreams for the future are housed around "jockeying a jet." We all know that regardless of the game he plays, Jack can be counted on to come out a winner.