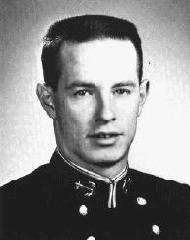 Hailing from the free world at large, but claiming Honolulu as home, Bob came here after graduation from Iolani High School in Honolulu. Having run cross-country and played football there, he tried plebe football, but gave it up in favor of a longing he developed in the Pacific, sailing, and shipped aboard the <I>Freedom</I> and the <I>Highland Light</I>. Plebe year he started fencing and as a youngster made the varsity on the foil team. Academics came relatively easy to him, and he was constantly on the Superintendent's List. Being a French slash, Bob took an active part in the French Club. His other interests were the now extinct Gun Club and WRNV. He likes water sports, good music on hi-fi, guns, a certain woman, and fresh air. He is known to open the windows wide on a freezing winter day. Aspiring to the Marine Corps, Bob still figures the best way out is through. 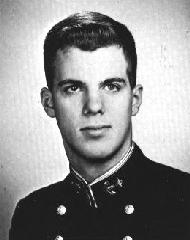 Mike, a naturalized Texan and Navy Junior, spent four years at Lamar High School in Houston before his arrival at Mother Bancroft. Plebe year found "Mr. Blackridge" a ready pupil. In between comearounds and chow calls, he managed to squeeze in enough studying to win a spot on the Superintendent's List, and his stars. Not the least of his academic endeavors has been his semi-official duty as company tutor. Mike has always found time to help out his roommates and others. He has been a mainstay of company basketball and volleyball teams since plebe year. His height, drive, and will-to-win have been valuable assets to his teammates. Mike's ability and perseverance as a student and his good-natured enthusiasm promise him an interesting and successful career in the Navy. 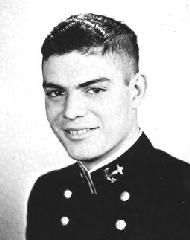 Carl was born in Honolulu, Hawaii, but he spent most of his formative years in Palo Alto, California. Before attending the Naval Academy, Carl went to San Jose State College in California, where he majored in Mechanical Engineering. He was an active member of the Brigade participating in the Model Railroad Club, Newman Club, and the Y.P. Squadron, which he enjoyed immensely. Having validated Math plebe year, Carl was known by his roommates as the great "gouger" in mathematics. Carl could have had higher grades, but being an easy-going fellow, he spent much time in extracurricular activities, which took valuable study time. Carl will always be remembered as the person to come to for academic difficulties for he was always willing to take a minute to help his classmates.