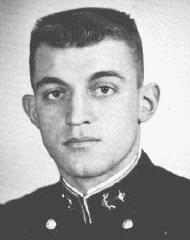 Although "Teb" admits he "felt like the Lone Ranger" at the beginning of Plebe summer, he soon fell into a busy schedule. He acquired many friends through his numerous activities which included Plebe football, crew, choir, <I>Lucky Bag</I>, and parties. Even though he has the typical brute appearance, his intelligence and extra push have put him into the "slash" classification. What about his female companionship? Plebe year Teb saw a little rough sailing, but his locker door will always prove things have picked up since then. Not all of his time was spent at USNA. His favorite pastimes at home included golf, swimming, dancing (a born twister), and spending those romantic evenings in his uncle's cabin nestled in the quiet mountains of Pennsylvania. Diversity, coupled with his friendliness and that extra push, are sure to mean a successful future career for Teb. 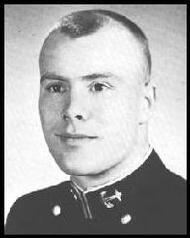 Graduating at the top of his class in high school, Dick donned a white hat to pursue a year's hard study at Naval Prep School. In the summer of '59 he moved from the bluffs of the Susquehanna to the banks of the Severn. During plebe year, Dick became known for his prowess in intramural sports but put most of his effort into the academic struggle. A man with an assortment of unusual interests, he would always be lacking in weekend cash. He'll always be remembered by his roommates, sitting at his desk long after taps scribbling academic notes or writing a far away friend, and then setting the alarm clock for early the next morning with no intention of getting up. His quick judgement and perception will aid him well in Naval Aviation. 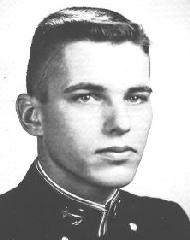 "Buck", a proud New Englander, hails from Wethersfield, Connecticut. With a fine record in both academics and athletics in high school,Buck had little trouble in adapting himself to the rigors of Academy life. In the fall and winter, his prowess was aggressively exhibited on the soccer field and squash courts, and when spring would arrive, his enthusiasm and great pride in yawl sailing were difficult to match. During third class year Buck acquired the distinction of becoming a member of the infamous "Century Club." But in spite of this, he also earned for himself the position of company commander for the following year. A firm believer in the 30-hour day, he could have been found on many a night poring over the <I>Wall Street Journal</I> or doing outside reading and extra study in the humanities during his own late, late lights. Buck's steadfast determination and unique ambition will surely make for smooth sailing in his Naval career.