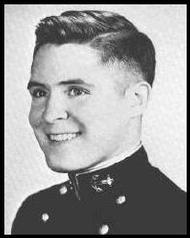 This smiling Irishman arrived at U.S.N.A. just one month after graduation from high school in North Lima, Ohio, where his activites were centered around sports and travel. During his stay on the Severn, Jim expanded his range of activities. Sports participation was still one of his chief interests, and variety was the spice of Jim's sports life. His interests ranged from cross-country and basketball to football and swimming. After youngster cruise Jim spent three weeks at Fort Benning, Georgia, winning his coveted paratrooper wings. No one ever heard of an Irishman who couldn't sing, and Jim was no exception. The Catholic Choir benefited from his talent as well as his classmates and friends. Academics were no real problem for Jim, thus leaving him free for participation in any friendly debates going on. Jim's future is certain to be one filled with accomplishment. His determination to get the job done well will be a valuable asset as will his friendly nature. 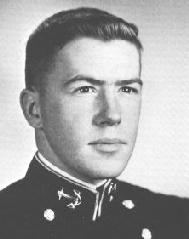 Although Ken is from Grass Lake, Michigan, all his mail came from Jackson, Michigan. You wouldn't realize that he came directly out of high school because he really didn't have to worry about academics. Naturally, he studied, but there were always those last few minutes of letter writing. And then he was either thinking about, talking about, or writing to his "OAO." During free time when he wasn't adding his deep voice to those of the Antiphonal Choir, he was taking a swat at his opponent in battalion boxing. His red hair would lead one to think he had a quick temper, but Ken seldom had a need to use it. His good humor and witty remarks left little room for anything but laughter. If Ken decides to become a career officer, the Navy will surely have gained a choice man. 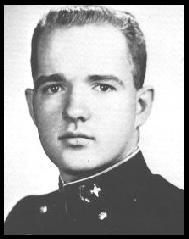 Mike arrived at the Naval Academy directly after graduating from high school where he had excelled in academics. His aptitude for liberal arts was immediately revealed by his high standing in these courses. Not devoting all his time to academics, however, Mike made the varsity fencing team youngster year. His interest in foreign affairs was shown by his membership in the Foreign Relations Club and his positions on the staff of the Naval Academy Foreign Affairs Conference. The Russian Club and the Newman Club were also among his extracurricular activities. In addition, he found time to enjoy classical music and do a considerable amount of reading. Having been very impressed by the training, during Aviation Summer, Mike is thinking seriously of flying after graduation. He takes a great interest in professional subjects and will be an asset to the fleet.