Robert Redmond Cronin, born in Arlington, Massachusetts, now pledges his allegiance to Silver Spring, Maryland. Robert is one of those members of the Brigade who claims he wouldn't turn back to breakfast, but who bleeds Blue and Gold every time he cuts himself shaving. Bob will always be remembered for his loud participation in the brass section of our Drum and Bugle Corps. Some people claim he enjoys liberty more than academics, and they're right. Although he always was a good English student, this verbal facility never helped him in telling a joke. He wasn't known as "dry Bob" because of his teetotaling. Bob looks forward to a career in Navy Air, which should fit him, as his feet were never firmly planted on the ground. 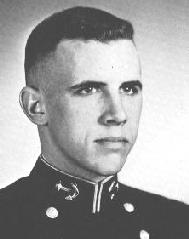 The only logical place for this avid sailor was in the Navy. Sandy lived near the water most of his life and did a lot of sailing. He expected to find Academy life close to the water too. Was he in for a surprise! After a hectic Plebe year, he quickly became adjusted to the Academy and took part in many activities. You might have seen him out on the river with the varsity Dinghy team, or down in the Log office supervising the next issue, as his editorial responsibilities required, or arranging another meeting of the clandestine Bridge Club. Life at the Academy was not dull for this boy, he always seemed to figure out a way for the "group" to throw another party. Aside from the daily problem of getting out of the sack every morning, he seemed to enjoy his stay at USNA. In the next years you will see him in the Navy - he will be happy as long as he is close to the water. 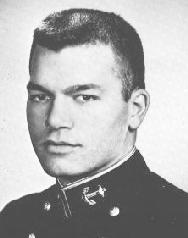 Being used to the warm winters of Florida, Vic found it a little difficult adjusting to the cooler weather of Annapolis and USNA. Coming to the Naval Academy directly from high school, he quickly adapted himself to college life both scholastically and socially. Vic could always be found around the boxing ring or on the softball field after classes, providing he wasn't helping out on the Hop Committee or the Brigade Activities Committee. Whenever a discussion was taking place on North-South relations, Vic could be relied upon to back up the Rebels to the hilt, no matter what the specific topic might be. Upon graduation Vic plans a career in Navy Line.