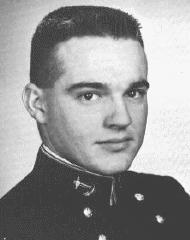 To those who knew him well, Jim was known as "J.J." Certainly a supporter of the Indiana Chamber of Commerce, "J.J." would talk at great length of his Hoosier State. A long time member of the Drum and Bugle Corps, Jim would insist on practicing his drums at all hours. This didn't interfere with his studies as his academic ability served him well in all departments. Jim had the obvious distinction of being a midshipman to have been on almost every sport list one time or another. Quick to defend any of his various opinions, he could help make any short study hour even shorter. However,his rollicking sense of humor kept any discussion from being too serious. A banker's son and an investor himself, Jim will be a valuable asset to the service, no matter which branch he chooses. 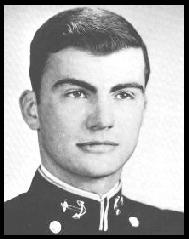 After a year at ND, Gene decided to see what the Navy-Notre Dame game looked like from the other side of the stadium. He soon became one of Coach Deladrier's favorites up in the fencing loft. No matter how crowded his academic schedule, Gene always seemed to find time between writing letters and recharging his batteries on the blue EMF for occasional study breaks, although he was careful to never let this weakness become habit-forming. Nevertheless, to the constant amazement of his roommates, he always seemed to pull above average grades and was especially outstanding in Bull, due, no doubt, to the combination of a glib tongue, a fast brand of humor with a sarcastic twist, and an unusually retentive memory for such basic facts as the blood type of the man who rowed number two port when Washington crossed the Delaware. All in all, the Naval service will be receiving one of its true professional men upon Gene's graduation, as his friends and he himself will readily admit.