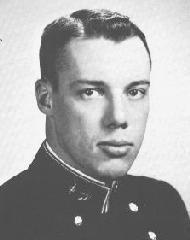 After a successful year at Penn. State, Jim decided to move on to bigger and better things at the Naval Academy. Here, he made his mark as a hard worker and an astute student. Frequently on the Superintendent's list, Jim always was ready to help his classmates along in this line. The Antiphonal Choir was one of Jim's pleasures at the Academy, as well as the Foreign Relations Club. Although not a letter winner, Jim's running ability always proved very valuable on the company and battalion teams as well as on the "Flying Squadron." No slouch when it comes to the femmes, Jim's drags often graced the appearance of the yard. Along this line, Jim doesn't worry about marriage, since he feels that it will come soon enough. With his academic ability and usual hard work, we know that Jim will succeed in whatever job he will receive in the Fleet. 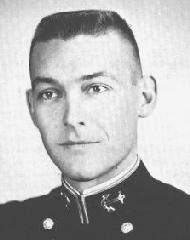 The "Old Man" of the company, Jim came to the Naval Academy by way of San Mateo College and Georgetown University. No stranger to the ways of the service - with his father a career officer in the army and his brother in the Air Force - Jim decided to round out the family and cast his lot with Navy Blue. Being company honor and ring and crest representative occupied many of Jim's spare hours. Dinghy sailing,varsity rifle team, and cross country kept him busy on the sports scene. The academic departments got along all right with Jim, although they would probably been happier if he had spent a little more time studying and a little less entering contests. The fact that he lived in D.C. helped many of his classmates in regards to imported femmes and wheels for "Operation Exit Annapolis." Although he enjoys oceanography and skin diving, Jim was duly impressed at Ellison Field and would like to fly helicopters. 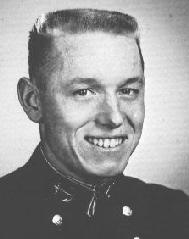 Frank, a Navy junior, came to us after a year at Columbia Prep. After attending eighteen different schools, he finally took the big step and became a midshipman. His first accomplishment was winning the Plebe summer freckle contest. After this he could be found playing tennis, 150 pound football, or rowing crew. Frank was a member in good standing of the French Club, and when not reading a French play or story, he could be found playing his bongos or writing one of his famous letters. On weekends Frank was never to be found in Bancroft, he was entertaining the public, or should we say the fairer half of the public. In fact, we could say that Frank was one of '63's most versatile and valuable public-relations men. Following in his dad's footsteps, Frank is looking forward to a career in his favorite domain, the sea. We of the Navy are proud to have Frank on our team.