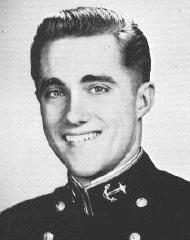 After a year on the campus of the University of Kansas, where he participated in football and track and was an active member of the Delta Chi chapter, Evan departed the sprawling Midwest to concentrate on the more serious aspects of life which the Naval Academy had to offer. His unique name of Evan Evans and even more unique personality have made him an unforgettable person to the feminine circles of Annapolis, for a great variety of local ladies have tried unsuccessfully to secure his coveted class crest. His extracurricular activities included track, weight lifting, and attending the German Club meetings. Always a star member in the academic world, Evan will most certainly have little difficulty with the nuclear engineering courses he intends to pursue through the postgraduate program in the Air Force. 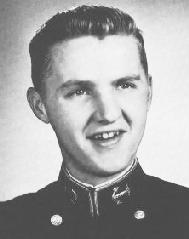 When Jim came to USNA from Pikeville, he carried with him the distinction of being one of the few men from his district ever to be appointed a midshipman. Since then there has been a great influx of appointees from that area, a tribute to his persuasiveness, the flash of his uniform, or both. Jim survived Plebe year as a varsity crew manager and as a member of the Antiphonal Choir. On his Youngster cruise, he learned the life of a destroyerman and yearned for his old Kentucky home. Through Youngster year he continued his service to the crew and the Choir. During Second Class year Jim continued with his previous extracurricular activities and struggled to stay ahead of the infamous Second Class academics. Jim came a long way from the hills of Kentucky to become an officer in the USN, and he will go even further in the service. He is a fine example of the men that uphold the tradition of the Naval Academy and the Naval Service. 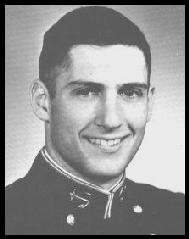 Pete came to the Academy after graduation from Ridgewood High School. Soon after his arrival, he became aware of the fact that his name was going to be a source of trouble during plebe year. A previous graduate named Featherstone had left a bad reputation. Pete wasn't a relative, but it's always nice to start off that way. "Feather," a hard worker with a good head on his shoulders, has been on the Superintendent's List most of the time. He plays company softball and basketball and battalion football. Besides being an active participant, he is also pretty close to being an expert on baseball and basketball. With "Feather's" intelligence and hard working, friendly attitude, he will have little trouble being a big success in whatever he does.