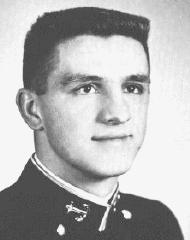 An ardent sports lover, Steve came to USNA after four successful years of athletics at Kenston High School. Hoping to continue playing football, he was hampered by injuries. Steve did however get a chance to play intramural sports including battalion football, basketball, and lacrosse. He found ways to enjoy himself without sacrificing study time and was always ready with a friendly word. He carried this ability to have fun with him on his summer cruises and readily made friends in every port of call. Very proud of being a part of the Naval Academy, Steve has continually worked hard to prepare for his future career. He developed strong interests in all fields relating to the Navy and other subjects which might be of later use. Steve is looking forward to the future and what those days might bring. 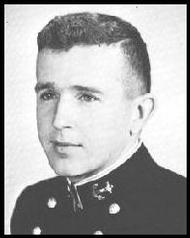 This curly-headed Irishman from Montpelier, Vermont, is one of the types that give the Brigade its reputation in many fields. He is truly devoted to the service. After thirty-four months as an enlisted man he looks to be a thirty year career man. "Fitz", as all his friends know him, has been in numerous predicaments on liberty which have furthered his reputation for having a good sense of humor. He is quite an athlete, having played Battalion fencing, company softball, heavyweight football, basketball, and Plebe fencing. In addition to these organized sports, he is a vicious weekend tennis player. During Second Class summer Bill was on the Plebe detail. Many nights were spent laughing at his little episodes with the Plebes. Then there is a serious side to "Baby Huey", as his roommates once called him. His fine record in aptitude and scholastics is only a small indication of the purpose with which he pursues his goal to be a good officer. 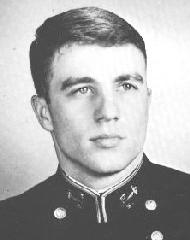 "P.J." came to Navy on loan from the playing fields of Notre Dame and brought with him obscure bits of sports information, poetry, F. Scott Fitzgerald, and a tremendous sense of humor, which made him the life of any party. It is the latter for which he will be most remembered, especially by the Executive Department. If popularity is an accurate yardstick by which to measure success, then Pat will get ahead no matter what he chooses to do. His experiences with UDT second class summer has attracted his attention to this field.