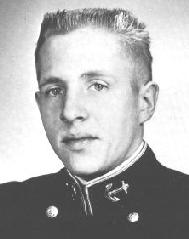 When Rochester, New York's delegate to USNA arrived on July 10, he carried his suitcase in one hand and his rigging knife and bongos in the other. His only distinction was his lack of a middle initial. After a thorough Plebe summer indoctrination became only a painful memory, and academic year number one with the Twenty-Fourth Company creeped slowly onward, Sleepy, as he was affectionately (?) called by some of the First Class, joined the Plebe swimming squad. In the spring he became a member of the Ocean Sailing squadron. A fine dinghy sailor back home on Lake Ontario, his talents were greatly appreciated by the crew of the Royona. Andy devoted his time to Ocean Sailing in the fall and spring from Youngster year on. Of course he is going to make the Navy his career, even though sailing ships are considered obsolete now. I'm sure that the Navy will find the kind of officer that they are looking for in the person of Andy George. 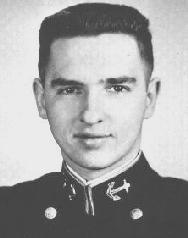 Bill, a native of Bloomsburg, Pennsylvania, came to the Academy after two years at Philadelphia Textile Institute. Although this was quite a change in atmosphere, he adapted himself readily, made friends quickly, and became a credit to the Brigade. Bill, quite the man with the girls, always had a problem of whom he should date. When he finally decides on his one and only there are going to be quite a few broken hearts. He always applied himself wholeheartedly in his athletic endeavors and did well at any sport he attempted, however his favorite and the one to which he donated most of his free time was basketball. This ability of his to apply and adapt himself to any situation or environment will insure that he will be capable of doing an outstanding job in any position to which he is assigned. 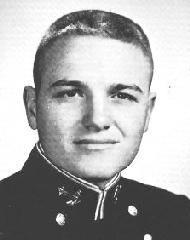 Contrary to Memphis, Tennesee tradition, George waited until late to pick out his guitar in Barcelona, Spain, while roaming through Europe. Neither was it to be expected that the son of a most distinguished submariner take such an interest in aviation. A former "white hat" who came here from Bainbridge, he divided his time between two great loves; the girls met on Glee Club and Chapel Choir trips and the classical guitar. His only complaint was the Bull Department was always trying to infringe on his extracurricular activities. George leaves the Academy wondering which was worse, a tough Plebe Year or the sea sickness suffered during youngster cruise. Let's hope he enjoys life in the fleet as much as he did the times spent around Mother Bancroft.