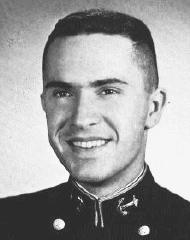 Dick was affectionately known to his friends as "Guff." An "army brat" most of his life, he is widely traveled and has taken up residence in many of our states as well as France. Here at the Academy, Dick was always one of the more active members of the Brigade. He held membership in the Newman Club and the Foreign Relations Club. Ocean Sailing and Fencing were his big sports. And last but probably most important he was the company honor representative for his class. Known to be no slouch with the female set, Dick is reputed to possess the aquaintance of more beautiful girls than any man in the company. A hard worker and a very sincere person, we wish all the luck and success possible to Dick in the future. 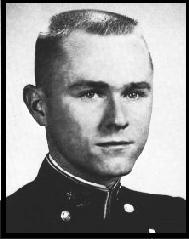 Steve came to USNA after a year at Severn School. Severn is an Academy prep school, and Steve had no trouble maintaining a high academic average there. Here at the Academy, Steve was active in sports, participating in battalion track, company soccer and cross-country. He seemed to be continually hitting the books, but somehow managed to turn out a huge volume of letters to his cross-country collection of lovelies. Steve (universally feared by members of the plebe class) was well-liked by his classmates. His determination to finish jobs begun and to finish them well has helped him during his stay here and will continue to help him in the future. Having been converted from other plans to Naval Aviation during second class summer, Steve leans toward a career in Navy Air, where he will certainly prove to be an enthusiastic and competent officer. 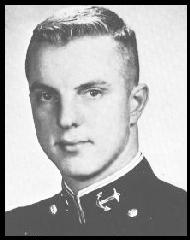 Pete would have to be listed among those who have been most successful in that never ending game of "beating the system." He was able to get more sleep, more sun time (artificial, of course), more extra food into his room, and more knowledge out of a little study time than anyone else - it seemed. Hailing from Long Island Sound where he learned the ways of sailors and the sea at a young age, Pete soon found his way into USNA. Although he came with plans of swimming for Navy, his talents went unobserved while on the plebe team, and he was often later heard saying that he didn't want to swim on that old team anyway. His other activities included ocean sailing in which he was a most valuable asset to the crew. When he was not reading the Wall Street Journal, Pete could be found building Model Corvettes while vocally shifting the gears. His good humor and friendly manner have won Pete many friends and will make him a welcome man in any wardroom.