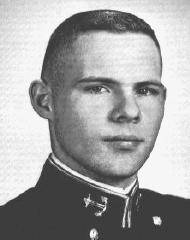 Jon was destined to wear blue before his birth, for his dad was a twenty-year man who made appearances at Pearl Harbor and Normandy. Because of his Navy affiliation, Jon started his traveling early and finally ended up in high school in Pineville, Louisiana, where he quickly established himself in sports and academics. After earning nine varsity letters, he graduated as valedictorian of his class. He has gotten along well with his classmates and with the members of higher estates. His consistent studying and mental ability have put him near the top in academics. He is never too busy to help that classmate who can't quite understand the lesson, nor is he too busy to use his various resources to create an amusing situation. He has those talents and that drive which have sent him through the Academy with an excellent record and which have made him worthy of the uniform he is now wearing. 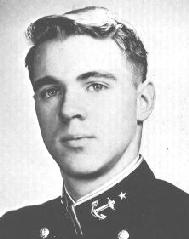 Tim came to us from the land of beer and the Milwaukee Braves. Almost immediately he went to the top ten percent of the class, where he's remained ever since. His love of language and natural ability in math helped him to benefit from the overload program. When he isn't cracking the books or dragging on our sunshiny weekends, "Shtoza" Harvey can be found strumming his guitar or practicing with the rest of the "Spiffies" in one of their many hide-outs in the labyrinthial maze that is the basement of Mother Bancroft. Many of us will remember Tim as a sincere friend with a quick smile and easy manner, always ready to help us through the pitfalls of youngster steam or skinny. With a lively personality and quick wits, Tim is sure to be a success in whatever field he chooses. 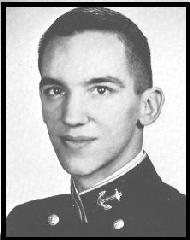 Bill came to the Academy as a representative of the Marine Corps. Finding military life here at the Academy to his liking, he was able to conform to the system with little trouble, and as far as anyone knows, he is the only man to run a Marine Recruiting Station in Bancroft. "Willy" has been active in company sports, the French Club, and the YP squadron. He hasn't been bothered too much by the academics, but he and the PT instructors didn't get along. He swam more like a turtle than a fish during his days in the pool. Willy is well liked and well known for his relaxed attitude and easy-going nature. He is always being kidded about his past service, but he vows he will never change. He has a great future in store for him.