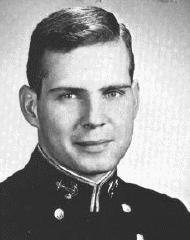 Dave Honhart hails from a small northern Pennsylvania town situated in the heart of the Alleghenies. He attended Warren High School and was graduated from there with the Class of 1959. During his four years at the school he took an active part in various extracurricular activities, including student council and various choirs. Sportswise, tennis and track were his favorites and occupied much of his time during the regular seasons. Why did he come to the Naval Academy? Well, the way Dave tells the story is that his one desire was to go to West Point. Somehow he ended up at the Naval Academy and is very pleased that he did. At the Academy he was selected to sing in the Glee Club and Catholic Choir. His efforts in the sports field have been limited to the Plebe tennis team and various intramural sports. Flying has always been one of his ambitions, but due to slight eye astigmatism, Navy line will probably be his field. 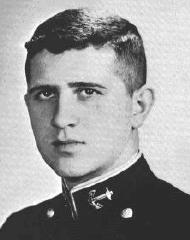 Ed entered the Naval Academy directly from high school and found himself to be one of the youngest members of the class. After edging out the Engineering Department plebe year in a close race, he has been constantly on the upswing and now stands in the upper half of the class academically. His interest and activity in company sports proved him to be a valuable asset to his teammates on the athletic fields. Next to sports Ed's prime interest was the opposite sex, and they found him equally as interesting. A career man through and through, Ed will undoubtedly go a long way in the service of his country. 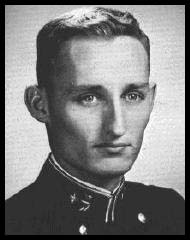 Bill came to us from Wyoming with legs that widely proclaimed him a born horseman. After two years in the NROTC at the University of Nebraska as a philosophy major, he took the step and came to USNA where he was quickly nick-named Tecumseh. An ardent admiree of Cyrano de Bergerac, Bill could be found every afternoon stomping up and down the mats in the fencing loft whanging his classmates with an epee. Evenings he spent orating and arguing in the Foreign Relations Club or the Naval Academy Foreign Affairs Conference. Bill devoted every week-end to following another great swordsman, D'Artagnan, in his pursuit of happiness with some excellent female help. Bill has long been enamoured of those sleek greyhounds of the sea, destroyers, and is looking forward to spending more than one tour of duty aboard them.