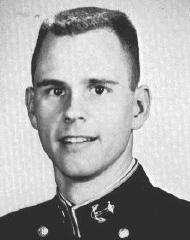 Perhaps it was the romantic possibilities of a Midshipman's carefree life that lured "House" Huber into blue. He soon acclimated himself to the worldly and cultured atmosphere by the Bay and read omnivorously in periodicals, almanacs, and journals. So interested did he become in current events, he learned by rote all the heads of state of the world. His dramatic ability manifested itself in impromptu dinnertime impersonations of vultures and reptiles. In athletics, the Skull's aggressive play and sling shot arm made him an asset to any football or softball team. Although his French rather resembled Latin, George achieved high honors in academics by determination and a keen intellect. An uncannily accurate wit and warm sincerity earned Hubes the respect and friendship of all. George exhibits all the requisites of a dynamic leader and will doubtless be tops in his chosen field. 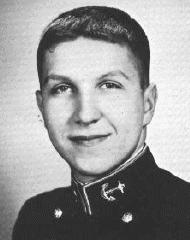 Paul, a Chicago suburbanite, attended Fenwick High School before entering our hallowed halls. In his years at the Academy, PT found extra time that the rest of us never knew existed. He was always looking for something to do, and if a job needed doing, Paul could be counted on to get it done. Never one to spend weekends sitting in his room he could always be found at Mrs. Mac's draghouse either dragging, playing cards, or watching TV. He was a varsity squash manager, a member of the Catholic Choir and model railroad club, and editor of the biographies section of our <I>Lucky Bag</I>. He also participated in intramural squash, softball and cross-country. On top of this, Paul kept his marks fairly high, and on occasion his name appeared on the coveted Superintendent's List. His prime interest lies in Submarines, a field where a tireless worker like Paul will be happily welcomed aboard. 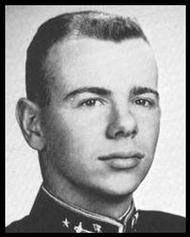 Straight from the farms of southwest Missouri, Karl was among the few members of his class who handled academics with little effort. Karl consistently managed to maintain high grades, even while participating in the overload program. His interests were not, however, confined to academics. Besides being an "N" winner on the light-weight crew team, he participated in a variety of intramural sports. His interest in music kept him busy in the Antiphonal Choir and Concert Band. Karl's weekend activities proved that he was a lover, not a fighter. His ready smile and easygoing manner insured him of having an ornament on his arm almost every weekend. We are sure that Karl will go far in any field which he enters and will be an invaluable asset to the Fleet.