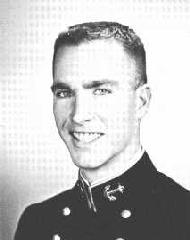 An island boy, John was appointed to USNA after graduating from Farrington High School in Honolulu. Being a track man in high school, John was especially good in company cross-country, in which he was top man. Johnny is also an able boxer and soccer player. Throughout his stay here, he has shown a marked aptitude for academics. John's easy-going manners, interrupted occasionally by provocation of his Irish blood, make him an interesting person. The most important single attribute to John's career at the Academy was being talent scout of the fairer sex. In this field, John was among the more proficient: he had that certain ability to snow any girl in a very short time. Unfortunately, he himself was not immune to their charms. Besides this, John is an avid sailor, a taste developed in the deep blue waters of the Pacific, and an amateur radio operator. His aspiration is to become a bistro piano player. 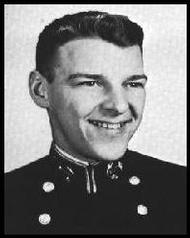 Having spent a year in the fleet as an enlisted man, Fred, never one to stay on the bottom very long, decided that he would rather be on the other side of the fence. So summer of '59 found him on the banks of the Severn along with a thousand other plebes where he began his four year long journey to Ensign. Plebe summer found Fred a member of the Drum and Bugle Corps, but he dropped out at the beginning of academic year to concentrate on his studies. Sportswise, Fred was on the plebe and varsity gym team where he worked sidehorse and parallel bars, concentrating more on the sidehorse. Fred also found time to go out for company squash youngster year. Never one to miss out on liberty (either on weekends or after football games), Fred could always be found in the company of a pretty young lady and probably always will be. 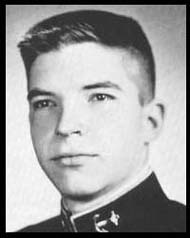 Claiming Texas as his home, Bill came north to try Navy life. Bringing with him a curiosity and a desire to learn, he became an engineer for WRNV and a hi-fi bug. We won't forget the nights when a burst of music and cries of anguish emanated from his room as he ran out wielding a soldering gun. Everyone who has been fortunate enough to make Bill's acquaintance realizes what a true friend and wonderful person he is. Navy Line is calling him, and he will become a welcomed addition to the Tin Can Fleet.