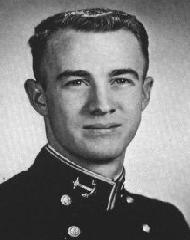 Albert Watkins Key, known to some of the fairer sex as Albie, is a strong-hearted, romping, stomping longhorn from Texas, and don't you forget it! Besides wearing that Texas look about him, Al is also readily identified by his receding hairline and flat-footed duck walk. As a true friend he is uncomparable. In fact, even when bricked on blind dates by his friends, he continues to wear an innocent and loving smile--until after the hop! In the way of sports Al specializes in blistering his hands on the gymnasium parallel bars, or on nicer afternoons, he is seen waddling around the tennis courts. In all seriousness, Al is picked by his friends to lead his class in accomplishments and goals no matter what field he enters. 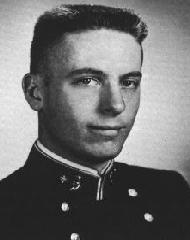 "Diamond Jim", always the soft spoken plebe indoctrination engineer, was born in Indianapolis, Indiana, and moved to Buffalo, New York. His Naval career began on July 7, 1959, after his graduation from high school. Active in cross-country and golf while at the Academy, Jim worked on the Christmas Card Committee, and played lightweight football. Choosing navy blue for future service, Jim would like to wear the golden dolphins. He has been an efficient midshipman and has shown the potential for a fruitful career in the silent service. 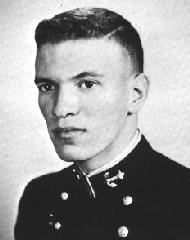 Two weeks after graduation from Bishop DuBois High School in New York City, Jerry became an official member of the Brigade. He was an avid sports fan with an interest in almost all of the sports offered at the Academy. His participation in brigade boxing plus numerous intramural teams attests to this fact. Academically, Jerry was constantly in the upper portion of his class. He was on and off the Superintendent's List, and he concentrated his main interests into French. Although his plans are not definite, he will be found either in Naval Aviation or Navy line.