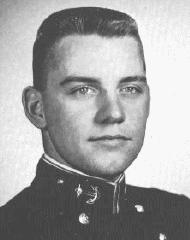 Robert Edward LaGassa came to the Naval Academy from Cass Tech in Detroit, Michigan, where he majored in obscurity. At the Academy Bob changed his name to "Guinea" and at the same time changed his major to "stardom". There were many times during his four years when the wee hours would find Bob and his flashlight working on his major. You had to work overtime to find Bob at home because his call to duty ranged through Catholic Choir, Glee Club, and the Brigade Activities Committee, to a few extra duties helping his fellow classmates keep their heads above the academic flood. Weekends usually found Bob dragging or bemoaning the stinginess of the U.S. Treasury and his lack of drag funds. Bob looks forward to a career in either Nuclear Power or Naval Aviation. He's given up his major in obscurity. 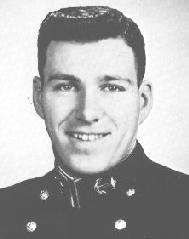 After four years at Gonzaga High School, Sonny attended Montgomery Jr. College for a year where he majored in parties and minored in football and basketball. His antics at Montgomery Jr. College having reached legendary proportions, the "Lang" ventured to the Academy where he decided he would spend more time on football and basketball and slack off a little on the social side. He could, however, be seen on most weekends sporting a cute drag around the Academy. A traveling man by nature, Sonny spent much of his summer leave periods touring the States and Europe, where he picked up his nickname "The Prince", which was to spread throughout the feminine circles of Annapolis. His four years have added much color to the routine and regimented atmosphere of the Academy and after graduation, the "Golden Tongue" will be greatly missed. 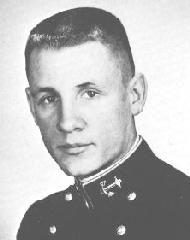 John, a Marine junior, was born in Quantico, Virginia, but considers California his home. Before entering the Academy, John attended the Boyden School in San Diego. Besides outdoor activities, he is a real addict of photography, always willing to exhibit his slides to the unwary. Academics have always been an integral part of John's life here at USNA, with the English Department offering him an exceptional challenge. When the academic day is over, he is uaually found in the ring at MacDonough Hall getting a lesson from a Brigade boxer. Weekends usually find John eagerly escorting a femme around the Yard. Upon graduation he may have enough seniority accumulated to become an "official" guide. However, these weekend activities are often curtailed. John never seems to get enough sleep. The Marine Corps or Naval Aviation are John's service choices. We wish him smooth sailing. He'll be a welcome addition to the Fleet.