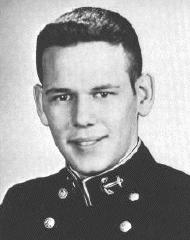 Bob is a "rebel" from Charlotte, North Carolina. Known to some of us as "Douglas," his favorite pastime is ocean sailing. He was a sailor from plebe year and participated in all the major races in which the Naval Academy participated. The Electrical Engineering department never gave him any trouble, but the Foreign Languages and English departments posed great obstacles. Bob's affinity for Officers of the Watch was unbelievable; he had more demerits and hours of extra duty from watch squad than any man living or dead. Bob is friendly and has a lot of motivation for the service. We are all sure that Bob is going to do just as fine a job in the fleet as he has done here at the United States Naval Academy. 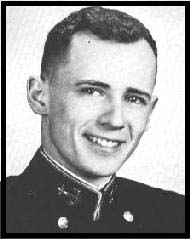 Born in Memphis, Lee came to USNA via Naps after spending two years as a white hat in various Navy schools such as ET and Sub schools. He was almost always on the Supe's List, and also wearing stars. In addition to his academic abilities, Lee was a varsity fencer and a member of the Antiphonal Choir. Lee's many overload courses in his major field of Nuclear Physics, eminently qualify him for nuclear subs into which he hopes to go. Lee's dry sense of humor and devil-may-care attitude have brought him the deep friendship and respect of anyone who has ever dealt with him. Lee will be a great asset to the Navy and America as a whole and will excel in his chosen field. 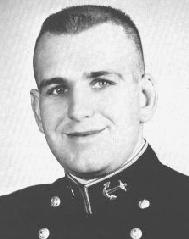 Jim, who hails from Paulsboro, New Jersey, came to the Naval Academy after spending one year at Columbian Prep. Jims tranquil and quiet personality added a much needed stabilizing effect to the "cave," as his room was often described by the Executive Department. Academics caused Jim very little trouble in his four years at the Academy. In fact Jim could often be found explaining the day's lesson to one of his roommates. Jim leaned toward the scientific portion of the curriculum. His high grades and high class standing in this field are evidence of his bright mind and hard work. In the afternoons, Jim's strong affinity for contact sports moved him to play company fieldball and lacrosse where he specialized on defense in both sports. Jim's friendly dispostion and sense of fair play won many friends for him throughout the Brigade. No matter what branch of the service he chooes, Jim will prove to be an invaluable asset.