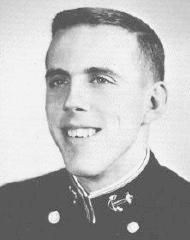 Who else but a Navy junior could have lived in Arlington, Virginia, Paris, Panama, and now, Pullman, Washington? Before coming to the Academy, Mick spent a year at Washington State University in Pullman. His athletic interests lie mainly in golf, and he was a member of the plebe team. As a knockabout sailor Mick has the distinction of being one of the few men who has ever managed to tip over a knockabout. Second Class summer convinced Mick that Navy Air would be his career choice if he can meet the necessary requirements. If success at the Academy is an indication, Mick will someday go to the top in the fleet. 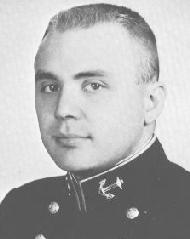 After a year at the University of Texas, Don packed up his talents and headed for USNA, and when talents are spoken of, he brought a trunkload with him. After a high school career of band, Don broke into the Midshipmen's Concert Band as a youngster with little trouble. His cornet might not match Maynard Ferguson's, but it's as nice as has been heard around here for quite a while. His baritone voice can be heard blending beautifully with the rest of the Chapel Choir during the Chapel services each Sunday. Added to these outstanding contributions, Don receives his reward as he sings in the Glee Club and really treasured those trips to New York, Atlantic City and Penn Hall. Science Fiction might be Don's most outstanding academic subject, but his value to the Brigade must be counted in hours of musical enjoyment. 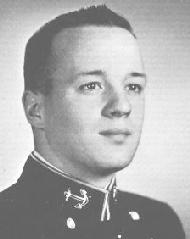 From the Chicago suburb of Park Forest, John came to the Naval Academy directly out of high school. Finding Plebe linemen rather massive, he switched to one hundred fifty pound football, which he enjoyed on both a varsity and company level. Acquiring a guitar to help out on Plebe happy hours, "Maccabbee" plunked away study hours for the next three years, to the general annoyance of his roommates. Also active in Chapel Choir and Glee Club, he managed to find enough time to keep the academic board away from his door without hindering his dragging. The Navy will have a fine officer in John.