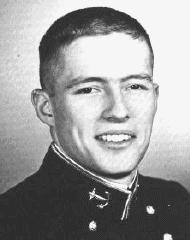 Attired in his madras sports jacket with a pipe clenched between his teeth, Metcalfe entered Bancroft as any typical limey would enter a pub on a Saturday afternoon. He soon settled down to the Navy routine and acquired the name, "Troll." With him he brought all of those outstanding qualities which that great military institute, Culver, had instilled in him. Jim is not only an excellent wrestler but also quite adept at any sport that exists. Even though he excelled at the study which he believed most advantageous to his future career, steam, none of his other subjects were left to falter. He was an honor student and a member of the honor committee. His membership in the gun club indicated his keen interest in the arts of a professional Navy man. It can be sincerely stated that Jim hasn't an enemy in the world. His keen wit, manners, and intelligence have made him everybody's friend. His future will be bright. 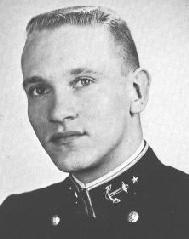 The "Star man" from the suburbs of Chicago chose the Naval Academy over the glitter of fraternity parties in the Ivy League. His outstanding achievements at Palatine High School carried over to USNA and four years here witness to his intelligence and serious-mindedness. An overload student, Tom is concentrating his efforts for the future in the field of Nuclear Physics and is particularly interested in submarines. Youngster year saw Tom come into his own as far as the women were concerned. Poised and self-confident, he was rarely without female companionship from then on. Time will prove the medium for measuring his success in the Naval Service. 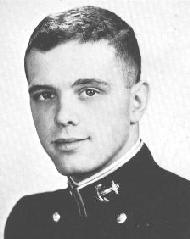 Jeff came to us directly from Oakland Technical High School. His previous athletic interest dominated his extracurricular activities at the Academy in the form of Plebe and varsity wrestling in the 123 pound weight class. Since he was small, Jeff was the recipient of many ribbings, all of which he took in stride. Jeff's temper showed only during an athletic contest or a study hour. If he made a slip in a sporting event and lost his temper, it was often unfortunate for his opponent. During a study hour, many times screams, yelps, and soundings could be heard coming from Jeff's room, and when investigated, Jeff would be found fuming at his desk, waving his slide rule, and mumbling something like "6 times 2 is 12, not 8; 6 times 2 is 12, not 8; . . ." Then the mystery of all the commotion would be solved. Everyone would know that Jeff had just spent an hour trying to solve a problem and had found his mistake.